It would be fair to say that Merseyside was well and truly red on Wednesday night. From the fireworks that peppered the night sky to the sea of red shirts in Liverpool city centre, this was a title-winning celebration of extraordinary emotion given the backdrop of the coronavirus pandemic and the long, long wait Reds fans have had to wait to see their side win the league.

Jordan Henderson hoisted the Premier League trophy high and handsome after the 5-3 win over Chelsea – the skipper being handed it by the last man to lead the club to the title in Sir Kenny Dalglish, and while we’ve all known for weeks that Liverpool are the champions of England it was still a magic moment.

Even Jurgen Klopp was overcome with emotion, giving Sky Sports the kind of viral interview that they absolutely crave. “We should all celebrate together at home,” he told watching Liverpool fans. “Drink what you want, you have to prepare for a party when this bullsh*t virus is gone, then we will have a party altogether. Make sure you are ready then! Thank you very much.”

The game itself was a bizarre affair, with Liverpool – clearly determined to ensure that their trophy presentation wasn’t soiled with a defeat at Anfield – romping into a three-goal lead courtesy of Naby Keita, Trent Alexander-Arnold and Gini Wijnaldum.

When Olivier Giroud scored on the stroke of half-time to make it 3-1, it seemed at the time to be nothing more than a consolation goal, with the Reds likely to see out the second half with ease.

But the second period burst into life when Bobby Firmino nodded in what was, incredibly, his first Premier League goal at Anfield this season, before substitute Christian Pulisic entered the fray and set up Tammy Abraham for Chelsea’s second before netting their third himself – 4-3, with about 20 minutes still left to go.

As fans outside Anfield let off fireworks off their own, the Reds were spurred on once more and Alex Oxlade-Chamberlain powered home to cap a thoroughly entertaining win for Liverpool.

The 2019/20 season finally concludes on Sunday with the trip to Newcastle United.

It may be a case that the Liverpool starting eleven against the Magpies is simply those players whose hangover has worn off!

We know that messrs Henderson and Matip won’t play, but you imagine Klopp will want to get James Milner involved after his period on the sidelines.

The gaffer will also be tempted to give his exciting young guns a decent run out at St James Park, but that will perhaps come from the substitutes’ bench as he lets his traditional first-team players sign off for the campaign on a high.

The ideal scenario would be that Liverpool cruise into a comfortable lead and then the likes of Neco Williams, Curtis Jones and Harvey Elliott can come on as they continue their footballing education. 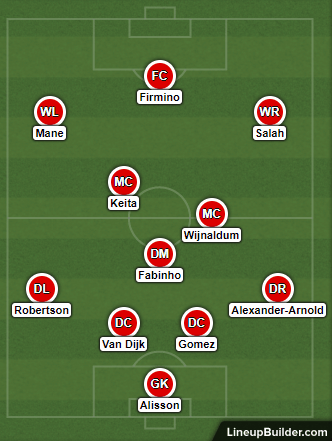 Being an unfashionable sort of manager, Steve Bruce doesn’t get the credit he deserves for another decent season for Newcastle, where they have belied a relative lack of transfer spending with another comfy mid-table finish.

That said, much of their best work did come prior to lockdown, and despite a brief rally after the resumption of the campaign – they thrashed Sheffield United and Bournemouth – the Magpies have fallen away since.

Looking at the Man City and Spurs games, if Liverpool are on it here they could do some serious damage….

The question, really, that putters have to ask themselves here is which Liverpool will turn up?

Will it be the hungry, super-focused and disciplined Reds that blew Chelsea away in the first half? Or will it be the casual ‘job done’ set of players who dropped points against Burnley and Arsenal?

This is one of those games where it might be worth holding your fire pre-off and instead betting in-play – how are the Reds looking after, say, 20 minutes? At this point, their odds of 1/3 will have lengthened if the game is still goalless.

If you are keen on a flutter before the game, why not give Both Teams to Score a goal at 10/11? Two teams who historically have served up entertaining encounters – and with nothing left to play for – surely won’t try to grind out a 1-0 win?