Wow….now that’s how you start the new season off! Okay, so fans of robust defensive football will not have been impressed with Liverpool’s 4-3 win over Leeds United, but for those who enjoy the unparalleled entertainment that an end-to-end game provides will have been in raptures as the action unfolded at Anfield.

It was a strange game from Liverpool’s perspective, with incredible attacking potency matched by individual errors and lapses in concentration at the back. And yet, according to the xG stats, the Reds ‘won’ 3.12-0.33 – that suggests that Leeds managed to convert three rather low probability chances.

However, it must be said that the Yorkshire outfit will cause plenty of teams problems this season, even if mistakes from Virgil van Dijk, Trent Alexander-Arnold and Joe Gomez gave the scoreline a sheen of closeness that, arguably, wasn’t there after a madcap opening half hour.

An early shot at goal from Mo Salah was handled inside the area by Robin Koch, and the Egyptian rattled home the spot kick to open his 2020/21 account after just four minutes.

But the game didn’t settle down from there, with Jack Harrison allowed to cut inside and fire home for the visitors in the 12th minute.

After 33 minutes the scoreline read 3-2 to Liverpool! Virgil van Dijk nodded home from a corner to restore the Reds’ advantage, before the Dutchman made a huge error of his own, failing to clear a ball over the top and allowing Patrick Bamford to wriggle free and level once more. But rejoice! Salah got free in the Leeds box and blasted home to restore his side’s advantage heading into half-time.

Most expected Reds to mange the second period appropriately, but those plans went out of the window when Leeds eased through the Liverpool backline once more for Mateusz Klich to volley home and make it 3-3.

A titanic clash looked set to be fizzling out into a draw, but then Rodrigo needlessly brought Fabinho down in the area and Salah held his nerve to notch his second spot kick of the game to complete his hat-trick – becoming the first Liverpool player to bag three goals on the opening day since John Aldridge in 1988-89.

That was breathless just writing it all down! But there’s no rest for the wicked, and it’s off to the capital on Sunday when Liverpool collide with potential title challengers Chelsea.

There were no new injury problems emerging from the Leeds game, and so the trio on the sidelines remains Oxlade-Chamberlain (knee), Shaqiri (thigh) and Tsimikas (Covid-19).

At the time of writing this preview, Thiago was flying in from Munich to sign on the dotted line with the club – the midfielder will be an outstanding addition, but you suspect Sunday’s game will come way too soon for him.

So it’s essentially a case of as you were from the Leeds fixture, with Jurgen Klopp’s only real conundrum deciding which of the midfield three to start with – a robust trio of Fabinho, Jordan Henderson and Gini Wijnaldum (assuming he doesn’t leave for Barcelona!) should be enough to outmuscle Chelsea’s own midfield. 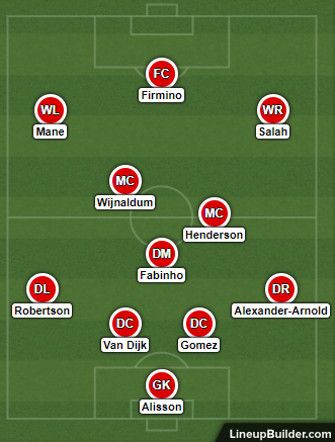 It would be fair to say that Chelsea had a decent campaign under Frank Lampard in 2019-20, and after splashing the cash in the transfer window there are expectations of something of a title tilt.

That may come when they’re back at full strength, but for now the likes of Hakim Ziyech, Christian Pulisic, Ben Chilwell and Thiago Silva are on the treatment table and struggling to be fit for Sunday’s game – as is Timo Werner, who picked up a dead leg in the win over Brighton.

That 3-1 victory looks comfortable on paper, but the xG data shows the Blues ‘won’ 1.38-1.27 – much closer than perhaps you might think. Reece James goal had a 2% probability of going in according to Infogol, which serves to reiterate how fortunate Chelsea were.

And had Neal Maupay and Lewis Dunk not missed absolute sitters, thinks could have looked altogether different. Will Liverpool be as forgiving on Sunday?

Here we have two teams that looked defensively vulnerable in their season’s openers.

For Liverpool, you suspect that was as much to do with rust – something of an anomaly, but Chelsea, well, they shipped 54 goals last season and so defensive fallibility is clearly their standard position.

Looking at the stats and the performances from the opening weekend, Liverpool were outstanding in attack and it was only individual errors that cost them – Chelsea, meanwhile, just can’t seem to defend full stop.