A meme-worthy video clip emerged in the immediate aftermath of Liverpool’s 3-1 win over Arsenal of Jurgen Klopp taking Roy Keane to task over accusations that the Reds put in a ‘sloppy’ performance. As the manager rightly pointed out, Liverpool had beaten an in-form Arsenal side with only a handful of moments of concern, and really the Sky Sports pundit should have been praising the Reds for a ‘champion’s performance’ in turning around a one-goal deficit.

At the same time, Keane had something of a point. Liverpool were not really at the races in the opening 25 minutes or so, and Andy Robertson’s gaffe – not the first time that a Reds defender has made an error of judgement already this season – handed Alexandre Lacazette an easy opener for Arsenal.

That seemed to jolt Liverpool to life, because it was barely three minutes later when they attacked hard and Mo Salah’s shot was parried into the path of Sadio Mane, who made no mistake.

And after 34 minutes the game was turned completely on its head when, as if to show Liverpool’s attacking instincts, one full back (Trent Alexander-Arnold) crossed for another (Robertson) to fire the Reds in front.

And that’s the way it stayed pretty much until the end when Diego Jota, from off the bench, made a lively cameo. He missed a sitter but soon made amends with a tidy finish to notch his first goal for the club and cap a 3-1 win for the Merseysiders.

“That was absolutely exceptional. Nothing, absolutely nothing was sloppy. Dominant against a team 100% in form and be careful as hell that we did not get caught on the counter-attack,” Klopp roasted Keane afterwards. “This game tonight – there is nothing bad to say. It was the opposite of sloppy.”

The two teams will get an immediate chance to renew acquaintances – albeit with drastically different personnel – when they meet on Thursday at Anfield once more in the EFL Cup.

With a trip to Aston Villa on Sunday to consider, Klopp will surely once again field his customary rotated starting eleven in the EFL Cup.

Both Virgil van Dijk and Fabinho got a run out in the last round against Lincoln, but it would be very surprising if either featured here given that the Melrose treatment room features Jordan Henderson, Joel Matip and Alex Oxlade-Chamberlain as guests, while it was revealed on Wednesday that Thiago Alcantara has tested positive for Covid-19.

Many will be given the evening off against Arsenal then, and that will give the youngsters and fringe players a chance to shine once more. Adrian will resume duties in goal, while the unrelated Williams pair of Neco and Rhys could feature in defence alongside Sepp van den Berg and Kostas Tsimikas.

In midfield, Klopp will be chomping at the bit to see Curtis Jones in action once more, and he could be paired with Marko Grujic and Xherdan Shaqiri again in the trio that worked so well against Lincoln.

In attack, you suspect Divock Origi will play through the middle and Takumi Minamino will occupy one of the flanks – the remaining decision for the manager will be whether to give Jota some more game time or keep his faith in youngster Harvey Elliott. 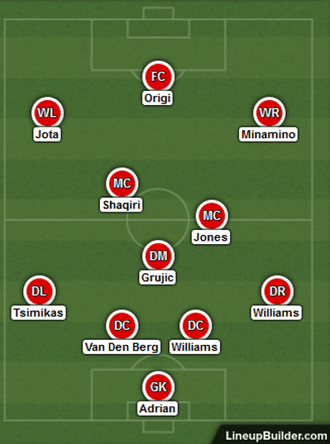 With four goals conceded in their last two games and a raft of defensive injuries, it’s clear that Arsenal are there for the taking right now.

But one key difference between the sides is that Mikel Arteta has fielded a strong starting eleven in the domestic cups at every opportunity, and so the Gunners might just fancy an immediate revenge mission in Merseyside.

They beat Leicester 2-0 in the previous round with a starting eleven that included the likes of David Luiz, Sead Kolasinac, Nicolas Pepe and Bukayo Saka – all of whom could be classed as first teamers – as well a talented bunch of youngsters headlined by Reiss Nelson, Joe Willock and Eddie Nketiah.

This is going to be a close game, you fancy, between two exciting sets of players.

If the two teams set up as we expect, the attacking quality is likely to out-fox the opposition defenders, and so goals are anticipated.

As for who will win….you’d want to see the starting elevens before jumping to any conclusions on that front. But from a betting perspective, Both Teams to Score & Over 2.5 Goals at 5/6 looks to be a fair price given what we expect.