There was a joyfulness in Liverpool’s play in their 7-2 win over Lincoln City in the EFL Cup on Thursday night that was a pleasure to behold. In between incisive passing and creative interchanges came goals for Curtis Jones (x2), Takumi Minamino (x2), Xherdan Shaqiri, Divock Origi and Marko Grujic, and a number of those were strikes of the highest order.

It was a positive performance from top to bottom, with so many good things coming out of the trip to Sincil Bank. Minamino clearly enjoyed himself and showed signs that he is settling nicely into English football, while Jones was, once again, outstanding in delivering a showing of maturity way beyond his 19 years.

There was a debut for Rhys Williams at the heart of the defence, while Reds fans got a glimpse of Grujic and new signing Kostas Tsimikas, who was making his first start after testing positive for Covid-19.

Curiosity abounded in the selection of Virgil van Dijk – did he really need to play 45 minutes with Joe Gomez and Joel Matip battling injuries? – and in bringing on Fabinho as his half-time replacement when the talented youngster Sepp van den Berg watched on from the dugout. But that’s Jurgen Klopp for you; a man who remains something of an enigma.

The Lincoln game was a handy distraction from matters in the Premier League, but it’s back to the serious stuff on Monday night when Liverpool welcome an Arsenal side with two wins from two so far to Anfield.

While Joel Matip and Alex Oxlade-Chamberlain remain medium-term absentees, there is good news on the prognosis of Jordan Henderson and Joe Gomez.

Hendo suffered a muscle injury in the win over Chelsea on Sunday, but the hope is that he will be fit to take on the Gunners. “Maybe [back for Arsenal], yeah, hopefully,” were the words of Klopp’s assistant, Pepijn Linders, when quizzed on the wellbeing of the club captain.

And the number two was similarly positive about Gomez’s progress, noting that the defender was likely to take part in full training today (Friday).

That gives the manager plenty of options, and you suspect that Gomez will slot into the normal back four in order to allow Fabinho to move forward into his more comfortable defensive midfield role.

If Henderson is fit to start, you would imagine he would also come into the midfield alongside Gini Wijnaldum, who seems to have shrugged off any doubts about his future at the club.

In attack, well, you can probably guess which tearaway trio will be fielded…. 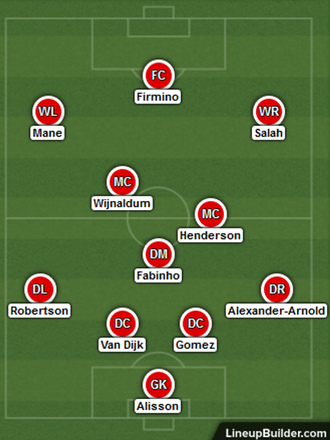 There’s that old saying that the league table never lies….

Even at this early stage of the campaign, Arsenal fans will be delighted with their side’s perfect two-from-two start, but is all as it seems?

In truth, the Gunners blew away Fulham on the opening weekend and were full value for their 3-0 victory over the Cottagers.

But the 2-1 win over West Ham? Well, that was a altogether different matter, and the Hammers will have been disappointed not to claim at least a point based upon the quality of chances created – the xG count against Arsenal was a lofty 2.21.

If their defence proves as charitable against the Reds, you would expect Salah, Mane and co to take full advantage.

Rumours of a Arsenal renaissance seem misplaced based upon the evidence of the West Ham match, and so Liverpool’s price of around 1/2 with the bookies looks to be more than fair game.

Of course, you won’t get rich in a hurry backing favourites at these sorts of odds, but there is every chance that the Reds will win this game and win it well.

Arsenal’s back four of Hector Bellerin, Gabriel, Saed Kolasinac and Rob Holding does very little to inspire confidence, while doubts remain about the discipline of Granit Xhaka and Dani Ceballos in the midfield double pivot role.