Once more, Jurgen Klopp sprung a surprise in his team selection for the EFL Cup tie against Arsenal….but this time the joke was on him as his side were knocked out of the competition on penalties.

Both Virgil van Dijk and Mo Salah played an hour of this contest – an unnecessary risk at this hectic juncture of the campaign? – but neither could inspire Liverpool past a resolute Arsenal rearguard, even if their keeper Bernd Leno was called upon to make some excellent saves.

The Reds should arguably have gone ahead in the first period, but Leno saved excellently from Diego Jota before Takumi Minamino missed the follow-up when hitting the bar.

Jota and Van Dijk both had decent chances in the second half saved by the German keeper, and while Arsenal rarely threatened the Liverpool goal they did an excellent job – by hook or by crook – of keeping the Reds out.

Any hopes Liverpool had of winning this tie in normal or indeed extra time appeared to fade when Salah was subbed off, particularly as replacement Divock Origi produced one of his frustratingly anonymous performances, and so the contest was destined for a penalty shootout.

Origi and Harry Wilson saw their spot kicks saved by Leno, and despite a miss from Mohamed Elneny it was Joe Willock who stepped up to slide the Gunners into the next round.

Klopp, you suspect, won’t be too disappointed give that he can now concentrate on more pressing matters in the league and on the continent. And that begins in earnest on Sunday evening when Liverpool travel to the West Midlands to take on Aston Villa.

It’s essentially a case of as you were for Liverpool on the injury front, although the hope is that Jordan Henderson will be fit enough to return on Sunday. Pepijn Lijnders said: “Jordan, we will re-evaluate on Friday after this game to see if he can be ready for Aston Villa.”

Otherwise, the hope is that Joel Matip, Alex Oxlade-Chamberlain will return after the international break as they look to regain fitness, while Thiago Alcantara remains in quarantine after contracting Covid-19.

Meanwhile, Klopp gave a slightly cryptic response as to why Xherdan Shaqiri wasn’t involved in the EFL Cup game against Arsenal as expected – hinting that the Swiss ace may be set for pastures new. “It is the time of the year when some things happen in the background and you have to react – that is what we did,” he said.

So, all things considered, the team against Aston Villa essentially picks itself. You know who will play in goal, who the back four will be and who will play in attack, and then if Henderson joins Fabinho in midfield there will be one space left – a straightforward tussle between Gini Wijnaldum and Naby Keita for selection. 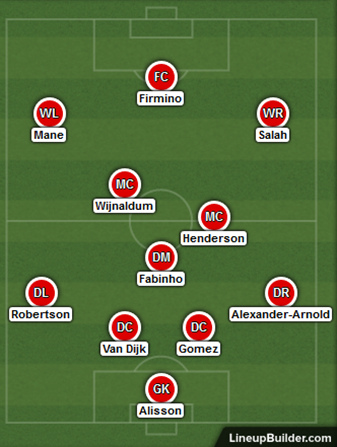 Write Aston Villa off at your peril – despite a brush with relegation last season, the Villains look to be kicking on n 2020/21.

Okay, so Fulham and Sheffield United aren’t the toughest of opponents, but the Villa beat them both well and without conceding a goal.

They have enjoyed a decent spell in the transfer window too, with Ross Barkley and Ollie Watkins a considerable improvement on what was at the club before, and so the Villains can enjoy lofty dreams of mid-table this term – Liverpool will need to be on their guard in order to avoid an upset here.

This is one of those games where you have to conclude that the bookies have got their odds spot on – Liverpool are 3/10, Aston Villa 9/1 and the draw is 9/2.

The problem with accurate bookmaking is that there isn’t any value to be mopped up, and so we have to look into other markets for opportunities.

Both Teams to Score – No at even money is an interesting play. Essentially we’re looking for Liverpool to keep a clean sheet – it’s unlikely that Villa will do likewise, and at Evens there is certainly some scope for that to happen.

And we’re expecting Liverpool to score at least once here, and once again Sadio Mane is undervalued in the Anytime Goalscorer market – 21/20 is an outstanding price for a player in such fine form.

Post Tags:
Homepage » Match Previews » Aston Villa vs Liverpool Betting Tips (04/10/20) – Reds Must Be On Their Guard Against Smash-and-Grab Villains