When we previewed the Aston Villa game just prior to the international break, we warned the Reds to be on their guard against a side that had performed far better than their status as relegation candidates would suggest so far this term. And boy, we weren’t wrong, were we?

The Villains scored four times in the opening 39 minutes, and for all Liverpool’s firepower even they didn’t really stand a chance of bouncing back from that.

Ollie Watkins bagged himself a hat-trick and John McGinn added a fourth as Villa ran riot against a Reds side who were tactically outclassed. The defensive high line was picked off and played through with relish, and once again – as had been the case against Leeds and Arsenal – individual errors at the back compounded the misery.

What Adrian was thinking when he essentially passed the ball to Jack Grealish for Villa’s first only he knows, but a lack of confidence in Alisson not being fit to play manifested itself throughout the team.

Watkins once again took advantage of weak defending from Joe Gomez to fire in and time and time again passes cut through the Liverpool line with ease.

Mo Salah pulled one back in the first period and notched a second after the break, but that was all elementary as Grealish’s brace and Ross Barkley’s strike added up to a magnificent seven for Villa. In truth, it could have been ten.

“You have to say that Villa did very well,” Jurgen Klopp said with typical understatement after the game. “They were very physical, very smart and very direct, we were not.”

The international break could not have come at a better time then, and with players coming back Klopp will be expecting instant redemption when his side take on rivals Everton at Goodison Park on Saturday.

There’s good news and bad news on the injury front.

Both Sadio Mane and Thiago Alcantara have now given negative tests for COVID-19 and both have returned to full training. While suffering with the virus neither reported any ill effects, and so the assumption is that they will both come into contention for the Everton game.

There’s some confusion about Naby Keita, who tested positive for coronavirus while on international duty with Guinea. But reports suggest that was a false positive test, and that the midfielder has since tested negative. Keep your eyes peeled for updates on that one.

Joel Matip is now back amongst the first team in training, and his cal

m assurance at the back has been missed – you suspect Klopp would love to field him against the Toffees. Meanwhile, Jordan Henderson played for an hour for England against Belgium and reported no ill effects.

The bad news is that Alisson will not be able to return. He has a damaged shoulder and could face a few more weeks on the sidelines yet. 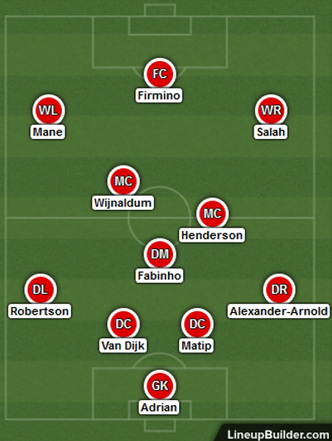 It will come as a surprise to many that Everton top the Premier League at this early juncture, but the truth is that they have been full value for their four wins thus far.

Carlo Ancelotti has shaken off the shackles of last season – where the Toffees were turgid at best – and has them playing a vibrant brand of attacking football, with Dominic Calvert-Lewin taking a step up in grade and James Rodriguez showing his undoubted class.

Everton put five past West Brom, four past Brighton and two past the normally resolute Crystal Palace, and so they will need to be treated with absolute respect on Saturday.

Given all of the evidence witnessed thus far, this game would seemingly have Both Teams to Score written large all over it! That, incidentally, is available at odds of 4/7 if you have a mind to it.

If Liverpool don’t cut out the defensive mistakes then their odds here of 1.87 will begin to look very short, very quickly against an Everton side playing with complete freedom and confidence.

And for that reason, we’re happy enough to swerve the match betting market, simply because all three results feel distinctly possible.

As such, let’s return to our opening gambit of a goals-based punt: Both Teams to Score & Over 2.5 Goals at 4/5 looks to be a tremendous selection.