At the end of Liverpool’s 1-0 win over Ajax, Jurgen Klopp made a beeline for Fabinho. The manager, beaming from ear to ear and showing off his trademark pearly whites, dashed over to the Brazilian and whispered….well, presumably not sweet nothings, but certainly words of praise for the performance of his makeshift centre back.

Fabinho was a key figure at the heart of the Liverpool defence, making a series of timely tackles and blocks and at one point clearing a goal-bound effort with an overhead kick.

While he isn’t a long-term replacement for Virgil van Dijk, the midfield man showed an aptitude for the centre back role that suggests that Reds fans can sleep easy for the time being.

In midfield, James Milner produced another timeless performance and when he was joined in the middle of the park by Jordan Henderson, on as a half-time substitute, the two generals ran the game.

And it was that, ultimately, that proved the difference in a game of little changes and that was settled in the first half by Nicolas Tagliafico’s 35th minute own goal.

It was a fairly nondescript contest, with Mo Salah and Sadio Mane quiet and Bobby Firmino once again looking off the pace – the Brazilian’s performances are starting to become something of a concern.

Afterwards, Klopp bemoaned the playing surface as much as anything else. “It was good enough to win the game. That’s what you need. I think both teams could play better football. At moments it was wild. The pitch was deep and muddy.

“Overall I’m happy with the game. It was not sunshine football, but we wanted three points and we got it.”

Opening up their Champions League account with a win, Liverpool will be hoping to keep that momentum going as they return to domestic action against Sheffield United on Saturday.

There is still no accurate diagnosis regarding Virgil van Dijk’s injury, and more will be known after the exploratory surgery on his knee. Just don’t expect to see him for a considerable amount of time.

Joel Matip has tweaked a muscle and could feature against Sheffield United, although the game comes too soon for Alisson’s recovery from a shoulder injury.

Sadio Mane had an ice pack strapped to his leg as he sat on the bench after being subbed off against Ajax, but the initial hope is that it was just a bit of soreness in the thigh and nothing untoward.

Klopp is also sweating on the fitness of Thiago Alcantara, who hurt his knee in the tackle that saw Richarlison sent off in the Merseyside derby. It is thought that the Spaniard is touch and go for Saturday’s game.

And so Fabinho may get called into action as a centre back again alongside Joe Gomez, with James Milner – if sufficiently recovered – operating at the base of midfield once again. Remember, the Reds take on Midtjylland in the Champions League next Tuesday, so possible switches – including Neco Williams in for Trent Alexander-Arnold and Diego Jota for Mane – may be made. 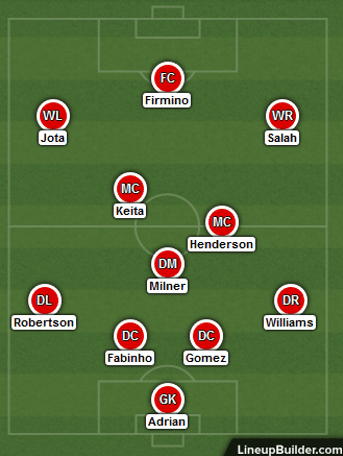 After a stellar 2019/20 campaign, you could say that Sheffield United have regressed to their mean.

Chris Wilder has done a tremendous job on a meagre budget, but eventually money starts to talk in football and the Blades are experiencing the other side to top-flight life.

They have lost four of their five games played, with their solitary point coming at home against a Fulham side who will have felt aggrieved not to have won the match.

These are tough times for Wilder’s men, and it’s hard to see them getting any better at Anfield on Saturday.

It’s no surprise that the bookies are favouring Liverpool for this one, and best odds of 1/4 about a Reds victory are reflective of that.

Finding value becomes difficult, because Sheffield United will be well drilled for this one and play, in essence, a conservative game in an attempt to stifle Liverpool.

We have to take on board that the Reds are weakened defensively without Alisson and Virgil van Dijk – it’s just a fact, and so backing Liverpool to Win to Nil at the even money mark comes with risk attached.

Maybe this is a game where Anytime Goalscorer bets are the smart option. Diego Jota is priced at 11/10 to find the net and, as mentioned, we expect the new signing to get plenty of game time here.