A small, but very fortunate, band of Liverpool fans were allowed back into Anfield for the first time since March. And they were treated to a glorious performance from their heroes as the Reds ran rampage against an always-tough Wolves side.

For all the club’s injury woes, they remain well-stacked in the attacking department, and that was evident when Mo Salah broke clear to fire home the opener.

Wolves are, typically, tough to break down, but Liverpool knocked the ball about with a carefree attitude that saw them fashion a number of chances – those largely fell by the wayside.

Indeed, it was left to Gini Wijnaldum to add a second after half-time with a fantastic shot from long range that took all of the sting out of the Midlanders.

Joel Matip climbed highest to head home a third after 67 minutes, and there was even more for the Anfield faithful to cheer about when Trent Alexander-Arnold entered the fray from the substitute’s bench after his spell on the sidelines.

And the right back was back to what he does best immediately, sending in a teasing cross that Wolves defender Nelson Semedo had no choice but to bundle into his own net with Sadio Mane poised to tap home.

It was the perfect night in many ways for the Reds, and that was felt in Jurgen Klopp’s jubilation after the match. “The game, the atmosphere, it was so nice. I had goosebumps. [The fans] started ‘You’ll Never Walk Alone’ – really nice. I never knew it could feel that good.

“This started in February and we were waiting to get normality back. Normality is good – I don’t think we appreciated it as much. It was very, very touching.

“Wolves couldn’t get into the game tonight and I think that was because of the way my boys played. It was a really, good high-level performance.”

With progression to the Champions League knockout phase as Group D winners assured, Wednesday’s game against FC Midtjylland – fortunately the last time we’ll have to type that this season – is something of a dead rubber.

We expect Klopp to field a youthful side against the Danish outfit.

There’s no real reason to change Caoimhin Kelleher in goal, while the manager may opt to start Alexander-Arnold to get some minutes under his belt.

In the centre of defence we could see a youthful pairing of Rhys Williams and Billy Koumetio, with Kostas Tsimikas filling in at left back.

Naby Keita is another who may get some much-needed pitch time here, while look out for young prospect Jake Cain alongside him and Curtis Jones in midfield.

In attack, it seems a given that Divock Origi and Takumi Minamino will start, and they may be joined by Diogo Jota, who didn’t feature from the start against Wolves. 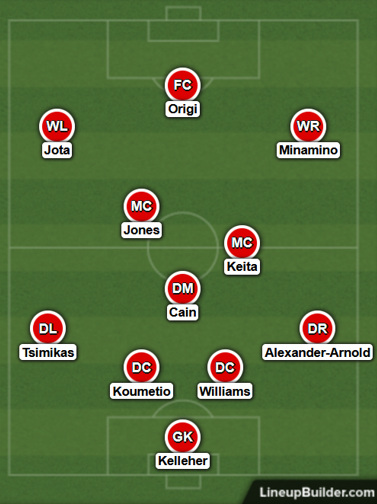 On the domestic front, things are going swimmingly for FC Midtjylland – they top the Danish Superligaen heading into the winter break.

But they have been outclassed in the Champions League, and after five Group D matches they have just a solitary point to their name.

It’s a tough group, admittedly, but they have shipped two or more goals in four of their five outings to date, and even a much-changed Liverpool side will surely fancy their chances of taking something from this encounter.

This will almost certainly be a much-changed Liverpool starting eleven, and look at the betting odds – the Reds are a best price of 11/10 to win the game, and that shows that the bookies are expecting a youthful line-up from Jurgen Klopp.

FC Midtjylland, for their part, can simply enjoy the game and try to claim a scalp, and the fact that they have scored in both games against Ajax and also against Atalanta suggests they at least have something to offer from an attacking perspective.

They could challenge a young Liverpool back four then, and it certainly wouldn’t be a surprise if the Danes found the net on Wednesday. But can they win the game?

The jury is out on that, and so perhaps favouring the goals markets is the smart way for punters to go here. Both Teams to Score, at 4/7, and Over 2.5 Goals at 4/6, are plenty short, but backing them in a double at 10/11 offers plenty of value given what we know about the sides.