It was a game that was expected to be something of a celebration of Liverpool’s fringe players and stars of tomorrow. But in the end, the 1-1 draw with FC Midtjylland was notable after a slice of history was created by one of the club’s most well-established stars.

Mo Salah became Liverpool’s leading scorer in the Champions League when he raced clear inside the first minute in Denmark to slide home his 22nd goal in the competition for the Reds – passing Steven Gerrard into top spot.

Jurgen Klopp was, understandably, effusive in his praise for the Egyptian. “Exceptional player, absolutely exceptional player,” he said after the draw. “Since we [have] worked together obviously a lot of things [have] clicked really for all of us.

“He helps the team massively and he knows and appreciates the help of the team as well.”

Otherwise, the game against FC Midtjylland largely passed by without incident – as you would expect from a ‘dead rubber’ game. The Danes equalised in the second half through an Alexander Scholz penalty after Caoimhin Kelleher had dragged down Anders Dreyer, and both teams had chances to win it – Diogo Jota and Divock Origi spurning the Merseysiders’ best chances in front of goal.

The game was notable for the full return of Trent Alexander-Arnold, who was appointed captain for the evening and who got a much-needed 90 minutes under his belt.

This was Liverpool’s youngest ever starting eleven in a Champions League game, with Rhys Williams and Leighton Clarkson – both 19 – given the nod from the start and Billy Koumetio, who has only just turned 18, coming on for Fabinho at half time.

Naby Keita also got a good hour in, with Fabinho, Joel Matip, Gini Wijnaldum, Jordan Henderson, Andy Robertson, Bobby Firmino and Sadio Mane all either given the evening off or only playing a small part in it….keeping them fresh for the trip to Fulham on Sunday.

The Liverpool squad should be well rested and ready to rock in the capital.

As well as many first team stars enjoying some or all of the night off on Wednesday, it has been revealed that Alisson is nearing full fitness. The Brazilian has been rehabbing his hamstring injury, and it is believed that he will return in goal on Sunday if there are no setbacks in training.

Elsewhere, James Milner is still struggling with a hamstring injury of his own and is unlikely to be involved against Fulham, while the same goes for Xherdan Shaqiri and his mysterious muscle ailment.

Alex Oxlade-Chamberlain is taking slow steps on his way back to full fitness, but sadly fans might not see Thiago Alcantara in the red shirt again until the new year. Virgil van Dijk and Joe Gomez are also privately working away after their long-term setbacks.

But this Liverpool squad is in a decent place right now, and Klopp can field a strong starting eleven on Sunday. 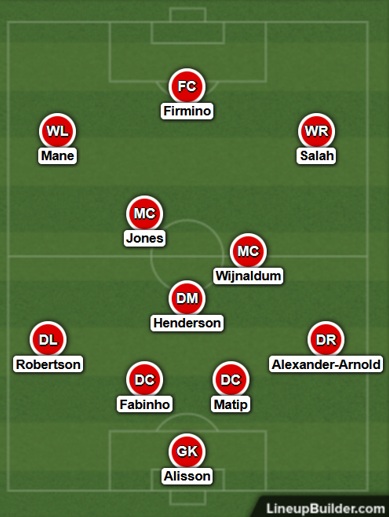 It was always likely to be a tough season for Fulham, and if you were to offer them a seventeenth place finish right now they would no doubt snap your hand off.

There have been some better signs of life of late from Scott Parker’s men, and the 2-1 win over Leicester at the end of November was a seasonal highlight.

That’s the good news. The bad is that they have lost eight of their eleven games, have kept just one clean sheet and have shipped two or more goals in more than half of their outings thus far.

It’s patently obvious that Fulham are struggling defensively – the stats speak volumes on that front, and you suspect they will have a very tough time keeping the Reds quiet here.

And so their only hope of getting something from this game, you would wager, is if they can find a goal or two of their own. They have netted against the likes of Leicester and Everton, so have a goal in them, but breaching the first choice – at this time – Liverpool defence is another matter entirely.

The Reds are a best price of 3/10 with the bookies to win this game – fair enough, really, given the evidence of what we have seen so far from the teams, and so we must look elsewhere for value.

The handicap market feels the smartest route to take, and Liverpool with a -1 line – remember, they will need to win by two or more goals – is a sensible choice at 5/6. We would expect them to cover that handicap more often than not against the Cottagers.