The problem with being champions is that you are there to be shot at – and everybody wants a piece. The American writer R W Emerson wrote that ‘if you take a shot at the king, you’d better not miss’, and unfortunately for Fulham a profligacy in front of goal cost them a famous victory over Liverpool on Sunday.

The Cottagers were the better side in the capital, it’s hard to contest that notion, and when Bobby De Cordova Reid gave them a 25th minute lead it was fully deserved.

Ivan Cavaleiro could and perhaps should have extended Fulham’s lead, but his lack of precision – allied to some fine saves from the returning Alisson – prevented Scott Parker’s men from doubling their lead before the break.

Improvements were made in the second half from the Reds, thanks in part to a tactical reshuffle after Joel Matip failed to return for the second period – we await further news on his diagnosis.

Takumi Minamino entered the fray and his energy aided Liverpool’s attacking play, who began to open up a Fulham side that had retreated into its shell.

And eventually the pressure told, with Gini Wijnaldum’s free kick heading goal-wards before Aboubakar Kamara leapt from the wall to block it with his arm. Mo Salah made no mistake from the penalty spot.

It was a good point for both sides, in the end, and it felt like a positive moment for the Reds heading into Wednesday’s top of the table clash with Tottenham at Anfield.

It was another disastrous week for Liverpool from an injury perspective.

Diogo Jota has suffered a damaged knee and won’t be seen again until late January at the earliest, while Kostas Tsimikas has been struck down with a very similar injury – he too won’t be available until 2021.

In slightly more positive news, Joel Matip suffered a back spasm against Fulham – hence why he was substituted. However, he could still be fit for the Spurs game, and that would be a huge bonus.

The likes of James Milner, Naby Keita, Thiago Alcantara and Xherdan Shaqiri are all battling injuries of their own, and none of those are likely to be in the mix for selection this week.

So where do we go from here? Well, Alisson can continue in goal and we might just have our strongest back four currently available – Matip could start, while Trent Alexander-Arnold, who Jurgen Klopp prefers not to overplay, could be pressed into action once more.

Alex Oxlade-Chamberlain was on the bench against Fulham, but it seems highly unlikely he will start here given his lack of game time. Expect Jordan Henderson, Gini Wijnaldum and Curtis Jones to go again.

And with no Jota, the traditional fab three should be deployed in attack. 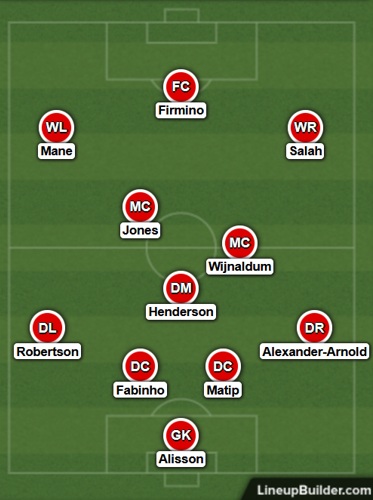 Unbeaten since the opening day of the season in the Premier League, Jose Mourinho has finally got this Tottenham side playing to his philosophy.

That run includes seven wins and four draws, with 23 goals scored and just nine conceded. More pertinently, four clean sheets in their last five are an indicator that ‘Mourinho ball’ is very much in deployment.

They have walked away with positive results from Manchester City (2-0), Chelsea (0-0), Arsenal (2-0) and Manchester United (6-1), and the object of Mourinho and Tottenham here will be to take a one-goal lead and then defend for their lives – will they have the opportunity to do that?

All of Tottenham’s last five Premier League outings have witnessed two or fewer goals, and that is based on Mourinho’s desire to keep games tight and testy for as long as possible – especially after his side have taken the lead.

Liverpool are odds-on to win this game at a best price of 3/4, and even most Reds fans might be inclined to agree that those odds are too short to back with confidence.

The most appetising value is to be found in the ‘unders’ line, which you can back at a price of 6/5. You feel that this will be a conservative game where the two teams will spend the early going feeling each other out, and so Under 2.5 Goals is perhaps the best way to go.