The bottom line is that Liverpool marched into the knockout phase of the Champions League with a 1-0 victory over Ajax on Tuesday evening. But, once more, an evening of celebration was marred by more injury woe for Jurgen Klopp.

He’d confirmed before the game with the Dutch outfit that Alisson will miss the next two weeks with a hamstring injury – not COVID as reported elsewhere, and later admitted that Andy Robertson and Jordan Henderson are playing through the pain barrier.

Happily, Klopp was able to call the win over the Amsterdam side as ‘one of his best nights’ in the Champions League, and while that might sound hyperbolic he was able to outmanoeuvre a dynamic Ajax team with a youthful starting eleven of his own.

Caoimhin Kelleher, making a surprising start in goal ahead of Adrian, went on to land the Man of the Match award for a string of fine saves, while Neco Williams assisted Curtis Jones’ winner to cap another fine evening from Liverpool’s youthful brigade.

Klopp was understandably overjoyed afterwards, with victory rendering the final Group D game against FC Midtjylland a dead rubber – crucial in resting his war-wounded squad. “Honestly, since I’ve been at Liverpool, it feels (like) one of the biggest Champions League nights we (have) had and for sure, without supporters in, it was the most important and the most difficult and the most exceptional game,” he said.

“We defended like devils. It is not that we played the best football. This is the situation we are in, that is what you make of it and we are top of the group after matchday five and we’ve never done that before. It is unbelievably good.”

Klopp will dust off his troops on Sunday as they welcome Wolves to Anfield for a 19:15 kick off.

It was a huge shock to see Kelleher given the nod over Adrian against Ajax, and based upon the strength of the performance you wonder if the 22-year-old will continue against Wolves as well.

As mentioned, both Robertson and Henderson are playing with injury at the moment, and while Klopp won’t want to take risks with either he is positive about their diagnosis. “Both played through so I would say we have now two days more than we had last week so I think (they are OK),” he said. “Things like this show up the next day a little different but in the moment I am positive about it. That is a problem for the next few days but not tonight.”

You wonder if both will be pressed into action on Sunday, especially the latter with Gini Wijnaldum desperate for a rest, with Nat Phillips coming in at centre back to allow Fabinho to move forward into midfield.

Naby Keita is thought to be close to a return as well, but otherwise it’s very much as you were on the injury front. Klopp will need to shuffle his pack once more. 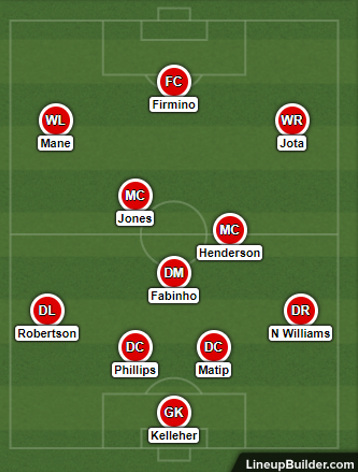 This has been the archetypal Wolverhampton Wanderers season so far, and exactly what we would expect from them.

They have lost games we might have expected them to – Manchester City and Leicester (West Ham not so much), produced scrappy draws with Newcastle and Southampton and defeated the likes of Fulham, Leeds and Crystal Palace without conceding.

Of their ten Premier League outings thus far, seven have witnessed two goals or fewer and only four have delivered on the both teams to score front, so punters are armed with an arsenal of useful information here.

This feels like the kind of game that Liverpool’s supremacy will ultimately net them a win by a one-goal margin, but Wolves are capable of taking points against the big clubs.

Consequently, Liverpool aren’t that edifying at odds of 1/2, although some punters will fancy dutching 1-0 and 2-0 to the Reds, both of which are primed at 7/1.

What is really appealing here is the Under 2.5 Goals line, which can be backed at a meaty 23/20. Wolves tend to deliver on this front, and Liverpool have begun to move in this direction too – six of their last ten in all competitions have obliged.

So that’s the play here, with the unders line also covering us in the match result market too should Liverpool scrap to a clean sheet victory.