It would be fair to say that Liverpool’s 4-1 win over Aston Villa in the FA Cup third round was rather unexpected. After complaining of fixture congestion and the pressures of that on his squad, Jurgen Klopp named something close to being Liverpool’s strongest starting eleven against what was basically Aston Villa’s youth team, with their usual names beset by coronavirus or in isolation.

The Reds’ betting odds were cut from 8/11 to 1/10 on the afternoon of the game as the team news was revealed, and when Sadio Mane nodded home after just four minutes most expected the floodgates to open.

But credit to Villa’s young guns, who stuck to their task and applied themselves admirably, and they got their reward just before half time when Louis Barry wriggled clear of Rhys Williams to slot home the unlikeliest of equalisers.

Could they hang on in the second period? It was always going to be difficult for them to maintain their intensity, and it wasn’t long before the class of Liverpool shone through – Gini Wijnaldum‘s strike regaining the lead on the hour mark, before two goals in as many minutes from Mane and Mo Salah added some gloss to the scoreline.

The stats – 83% possession, 29 shots, 18 corners – are instructive, but credit should go to Villa for a game effort against the champions of England.

Progress in the FA Cup achieved, the Reds will have enjoyed nine days off by the time that Sunday’s crunch clash with Manchester United comes around – could that prove all important given that Ole Gunnar Solskjaer’s side were in action in midweek?

You can start to see some of Liverpool’s formerly injured parties coming back to fitness, with Thiago Alcantara and Alex Oxlade-Chamberlain featuring prominently of late and Xherdan Shaqiri serving up two assists in the win against Aston Villa.

The main issue for Klopp comes in defence, where Joel Matip is once again a possible absentee after limping off the field against West Brom a couple of weeks ago. The Cameroon ace is becoming something of a liability, and now the manager must choose between fielding an inexperienced Rhys Williams or Nat Phillips alongside Fabinho or pressing Jordan Henderson into action as a central defender once again.

Diogo Jota and Naby Keita are also likely to be sidelined, but otherwise Klopp has a full deck to select from as he seeks the right balance against an in-form United side. 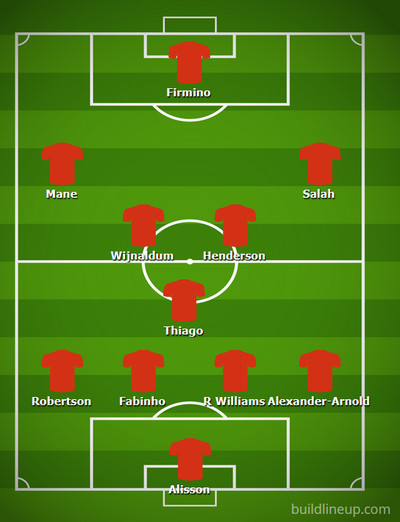 Remember when Ole was at the wheel? And then Ole was public enemy number one in Manchester?

There may be a schizophrenic attitude towards United’s manager, but you really can’t fault the job he has done after years of mismanagement following the end of Sir Alex Ferguson’s reign.

Since losing 0-1 to Arsenal, they have been on an unbeaten run of eleven games in the Premier League, with nine of those victories and a total of 25 goals scored.

They might have been dumped out of the Champions League prematurely, but confidence is building at Old Trafford and they might just be sensing that they can get a result at Anfield.

That said, they have kept just five clean sheets in the league this term, and so there are plenty of opportunities for Liverpool to exploit a lack of strength at the back.

Given Manchester United’s lack of reliability in defence, and also Liverpool’s own woes at centre back, you would expect goals to follow in this game.

That’s not to say this won’t be a cagey game, because there’s plenty at stake and that feeling will seep into the players – crowd or no crowd.

But an early goal could open this game right up with both sides comfortable on the counter attack, and that has to be the main angle for punters on Sunday. Both Teams to Score is available at 8/13, Over 2.5 Goals at 4/6 and you can double both of those up in a 10/11 package.

As for the main match market, Liverpool are a shade under even money to win this game and it would be hard to call that a value price, even if they are the most likely victor on home soil. That’s not to recommend betting on United either, but a speculative punt on the draw at 14/5 may yield dividends.