The unpredictability of Liverpool FC continues. After claiming wins against Arsenal and Tottenham, but losing to Leicester and Hull in emphatic fashion, in the past month alone, it is hard to say with any certainty exactly how the Reds are playing at the moment. They are lurching from glory to disaster and back again at a rate of knots.

What we do know is that they seem to raise their game against the big boys. They have taken 19 points from a possible 27 against the Premier League’s top six this term, and you will struggle to find a record as good as that anywhere else. If there is some kind of psychological reasoning for that, then let’s hope the positivity continues into Sunday’s clash with Manchester City.

Our hosts this week were rather unceremoniously dumped out of the Champions League in midweek by Monaco, and you would expect some kind of reaction from that. Will another uninspired showing prevail, or will we see a big performance? You would anticipate the latter, and the Reds will need to come to the party if they are to take anything from this game.

Anyone who watched the opening half against Burnley last week wouldn’t give Liverpool a prayer. They simply could not get going, and the Clarets fully deserved their lead. If Gigi Wijnaldum hadn’t struck on the stroke of half time – a goal which surely broke Burnley hearts – then we could be sat here discussing the visitors’ first away win of the campaign.

<>As it was an Emre Can strike secured all three points, even if those were nearly snatched away when Matt Lowton inexplicably fired over for Burnley late on, and really it was two points gained rather than three won.

The only consolation is that the Reds simply don’t fire against the division’s weaker sides; let’s hope that the trip to Manchester sparks something in the players.

There’s good news and bad news on the injury front as far as Liverpool are concerned: firstly the good news is that Roberto Firmino is back in training after missing the Burnley game.

The Brazilian sat out the Clarets encounter with an undisclosed injury, but with Divock Origi failing to fire in his absence Firmino can expect to come straight back into the starting eleven on Sunday if fully fit.

Now the bad news. Jordan Henderson has still not returned to fitness and is struggling with a foot injury; he is unlikely to pull on a red shirt again until the Merseyside derby on April 1.

Less worrying is the continued absence of Daniel Sturridge. The frontman has battled with illness and a hip injury in recent weeks, and has not been seen in training at all this week.

Another who has missed preparations for Sunday’s game is Dejan Lovren, himself struggling with a groin problem. Ragnar Klavan is likely to deputise once again. 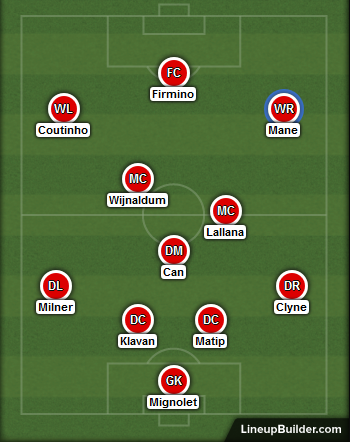 The midweek defeat to Monaco was something of an aberration for City, who have been playing much better of late. They have kept four clean sheets in their last five league outings, although it has to be said Liverpool will pose a very different problem to that presented by West Ham, Bournemouth, Sunderland and Stoke. Monaco ruthlessly exposed City’s lack of quality at the back, and the Reds will be hoping to do something similar on Sunday.

What isn’t in doubt is their attacking prowess. Pep Guardiola’s men have netted in 24/28 this term, and three of their four blanks came away from home. At the City of Manchester Stadium, they are particularly free-scoring.

But look at that home form: W7 D5 L1. That is good, obviously, but is the standard we’ve come to expect of a perennial title challenger? They have won little over 50% of their home matches this term, and that has to give Liverpool strength.

Ordinarily we would be predicting goals here, but there is just something about Liverpool’s record against the top six teams that puts us off:

So actually, only one of the Reds’ last five games against top six sides has gone over the 2.5 goal mark. We bet you didn’t see that coming?

Maybe Jurgen Klopp’s philosophy changes in these big matches – who knows? – but certainly it appears as though he likes to keep things close and edgy.

You do get the sense though that both teams will find the net, and that lends itself to a 1-1 draw, given what we have discussed so far. We’ll be taking the 7/1 on the stalemate, that’s for sure.