If we treat the Burnley debacle as a one-off freak occurrence, Liverpool’s form this season has been outstanding. Victories over Arsenal, Chelsea and Leicester – three sides who you would imagine will occupy the top half of the table at least – is very encouraging.

It wasn’t just the 2-1 win over Chelsea that was so impressive, but the manor of the performance. The Reds took the Blues apart, and while the scoreline doesn’t necessarily reflect the fact it was clear who the dominant force was from minute one. Liverpool’s high press and all-action style put Chelsea’s creative talents under all kinds of pressure, and quick one-touch football rendered the human shield, N’Golo Kante, almost invisible. Yes, Jordan Henderson’s goal was out of this world, but Liverpool were on a different planet to Chelsea for most of the 90 minutes.

And so onto Saturday we go, and the visit of Hull City to the redeveloped Anfield. After dismantling Leicester 4-1 last time out on home soil, the Merseysiders will be looking for something similar against the Tigers, who appear to have lost their bite in the last couple of weeks.

Jurgen Klopp’s biggest headache here is a pleasing one: deciding whether to reintroduce Roberto Firmino after injury or not. If that’s as tough as your selection issues get, then happy days.

You suspect the German will stick with the same eleven that started against Chelsea, which looked like this: 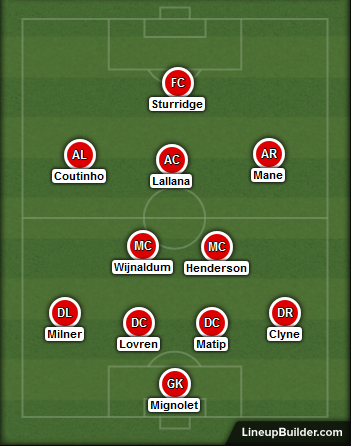 Simon Mignolet is expected to continue in goal despite the return to fitness of summer signing Lorus Karius, while James Milner’s transformation to right-footed left back appears to be complete.

In midfield Jordan Henderson provides the platform from which those around him can grow, and Sadio Mane’s direct running must have caused a significant lack of sleep for Cesar Azpilicueta last Friday night.

Sturridge or Firmino? We’d be drafting in Firmino ourselves after his display against Leicester, but Klopp is a noted fan of Sturridge’s and so the England international may just get the nod.

Why does it always happen? A caretaker manager, leading his side with aplomb, gets a sniff of the job permanently….and all hell breaks loose.

Okay, that might be an exaggeration, but since Mike Phelan was linked for the Tigers hot seat on a long-term basis he has overseen a slump in form. Hull, the favourites for the drop in pre-season, are starting to finally live up to that billing.

So after opening the campaign with victories over Swansea and Leicester, the Tigers have since taken one point from a possible nine, and Saturday’s 1-4 annihilation at the hands of Arsenal was indicative of what happens when a progressive team actually attacks them. That is food for thought when analysing Saturday’s match.

Liverpool are available at a best price of 1/4 for this fixture, so clearly the bookmakers have made their minds up which way it is going to go.

That sort of price makes for very little appeal of course unless you are placing some kind of ‘sure bet accumulator’, so value must be sought elsewhere. Our other angle in is goals, and that has been scuppered somewhat too: a best price of 8/15 awaits anyone who wishes to back Over 2.5 Goals.

Assuming that Liverpool are going to score, a flutter in the First/Anytime Goalscorer markets are worth a try, too. Here’s some interesting stats from the Reds’ opening five games; the column we’re particularly interesting in is ‘shots per game’ (with thanks to WhoScored).

If you don’t shoot then you don’t score, as the old saying goes. By that logic, Philippe Coutinho is a must back in the First (5/1, Betfred) and/or Anytime (7/4, Betfred) markets.

The only way to create any value in the outright market is to explore the half time/full time sector, where Draw/Liverpool is available at 3/1 with Ladbrokes. It has potential of course, but is a selection stepped in luck rather than judgement.