It is clearly apparent that Liverpool have a problem seeing off sides from the wrong end of the Premier League table. How else can we explain two more dropped points, this time on home soil against Bournemouth in midweek?

The Reds have dropped points in 14 of their Premier League outings this term, and eight of those have been against teams in the bottom half of the division.

How can we quantify that? It is a mentality issue, an inability to mix it when the opposition’s strategy is a little ‘in your face’, or a mixture of the two? We’ll find out a little more about the character of these Liverpool players when they travel to the Potteries to take on Stoke City on Saturday.

There were mitigating circumstances in the stalemate with Bournemouth. Without a real creative spark in midfield, matters were exacerbated when Phil Coutinho had to be withdrawn after being sick at half time. That said we scored twice, so from an attacking perspective there was no problem.

But defensively question marks were raised again. That’s the fifth time in twelve league starts in 2017 that the Reds have conceded two or more in a game, and you don’t need to be Miss Marple to know that simply isn’t good enough. Jurgen Klopp’s decision to drop/rest Joel Matip in midweek on reflection looks even stranger.

The good news is that Stoke aren’t in the best form themselves having suffered three straight defeats. They’ve only scored three goals in their last six outings, so Liverpool’s defensive frailties hopefully won’t be tested too readily!

The desperation with which Reds fans want to see Jordan Henderson is almost palpable. The midfield dynamo remains sidelined with a long-running foot injury, and while he is in light training there doesn’t appear to be a return date set in stone. Without Adam Lallana as well, the absence of the club captain is being even more harshly felt.

Lallana appears to be out for another three weeks with that groin strain suffered on international duty, while Sadio Mane – without whom the Reds are yet to win a game this season – may not pull on the shirt again this season. The above is a triple blow of huge consequence.

You would expect Coutinho will have shaken off the virus that forced his early exit in midweek – there has been no indication from the camp as yet however.

Klopp will need to stay positive in his team selection as Stoke are a side that need to be tackled head on. Hopefully he will leave the five-man defence he trialled in the second half against Bournemouth on the shelf! 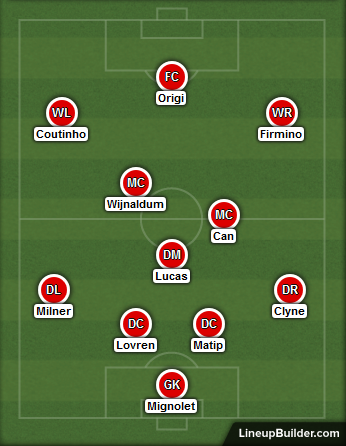 Stoke have lost five of their last eight Premier League matches, so any discomfort that Liverpool might be feeling – privately or otherwise – at the absence of Henderson, Lallana and Mane can be assuaged somewhat.

Mark Hughes’ men are typically better at home (W3 D2 L1 last six) than away (W1 D1 L4), so they will draw strength from playing in front of their own supporters. That pattern extends to their overall form this season – W6 D5 L4 at home, W3 D4 L9 on the road.

The back-to-back trio of results in early March caught the eye. They comfortably saw off Middlesbrough 2-0 at home, drew 0-0 at Manchester City and fought hard in a narrow 1-2 loss to Chelsea. At that point, they would have been buzzing.

But consecutive losses at Leicester and Burnley tell their own story – games in which they didn’t score and created few chances – and that has to give Liverpool strength ahead of this one.

Only one of Stoke’s last eight games have witnessed both teams scoring, and that indicates how they have struggled at times, and dominated at others in their most recent fixtures.

Assuming that Klopp restores Matip back into his starting eleven, Liverpool will be a lot stronger at the back, and with a defensive midfield trio of Lucas and Can, and Wijnaldum to an extent, we would fancy the Reds to keep a clean sheet as long as they can eradicate the unforced errors.

So we’re going to go in with Under 2.5 Goals at 19/20; once again, the Reds lack a creative spark in the heart of the midfield.

Stoke better at home than away; Liverpool without a win in five on the road. It is hard to make a pressing case for either team to win this game, so let’s instead go with the draw at 14/5.

There isn’t much to get excited about in this game from a punter’s perspective, but if we are going to follow the ‘low-scoring draw’ notion off a cliff then we may as well get behind the 1-1 correct scoreline at 13/2 as well.