The international break is a huge annoyance for a number of reasons, and it is especially so when it arrives to halt the brilliant momentum that Liverpool were building just prior to the fortnight off.

Courtesy of 3-0, 3-0 and 4-1 victories, the Reds enjoyed the best possible week, and so an enforced lay-off was exactly what the doctor did not order. That latter performance in a convincing win at West Ham was one of the most thrilling that the team has produced in a long time.

So bah humbug to the international break; a fortnight made all the worse by the recurrence of a hamstring injury suffered by Sadio Mane while representing Senegal. Why the diminutive attacker was even playing for his country, despite missing the previous month with the injury, is anybody’s guess, but it’s fair to say that the Senegalese FA won’t be receiving a Christmas card from Melwood this year.

Happily, Mane took part in light training yesterday, and while he may not be fit to start against his former club Southampton on Saturday, he should nevertheless be able to play some part.

The Saints arrive on Merseyside following a tepid start to the season, and they appear to have gone backwards under new boss Mauricio Pellegrini. Averaging less than a goal per game, they should – theoretically – be easy pickings for the Reds at the weekend.

Let’s just hope that Jurgen Klopp is in the dugout. The gaffer was taken to hospital on Wednesday after complaining of feeling ill, although the good news is that he was discharged later in the day with a clean bill of health.

“There are currently no plans for Jurgen to remain in hospital beyond his appointment,” a club statement read. “He will therefore return home this [Wednesday] evening.”

Victory over the Saints on Saturday would be the perfect medicine.

As mentioned, Sadio Mane suffered some kind of thigh strain while on international duty and may not be risked from the start at Anfield.

Jordan Henderson missed the West Ham match and ruled himself out of the England squad, but the good news that he is fit and raring to go – whether he gets in the side, given how impressive Alex Oxlade-Chamberlain was in deputising for the skipper against the Hammers, remains to be seen.

And Klopp was given another great boost with the return to training of Adam Lallana, who is now taking part in the intense first team sessions. He will soon be back in the red shirt, and what a timely boost that is ahead of the busy Christmas and new year period.

Otherwise it’s as you were, with Nathaniel Clyne expected to be out until early in 2018. 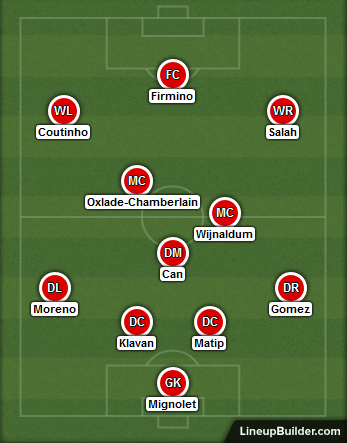 It’s been a strange old start to the season for Southampton, who have accumulated just 13 points from their eleven outings so far, which has included fixtures against four of the bottom sides in the Premier League table.

The cause is obvious: they have scored just nine goals in eleven starts, and while defensively they are sound (eleven conceded) it would seem that the Saints are going into games with the express aim of not losing, rather than winning – always a dangerous mindset.

They have scored two or more goals in just 2/11 this term, and their final game prior to the international break – a 0-1 defeat to Burnley – was the perfect microcosm of their misfiring campaign thus far.

Even looking at this fixture through neutral, unbiased eyes, you would have to say that Southampton are going to struggle to contain Liverpool for the full 90 minutes.

The Saints have opted to defend deep and in numbers this term under Pellegrini’s conservative approach; opting largely to eschew any attacking advances (as evidenced by their ‘goals for’ column).

In that sense, they are unlikely to challenge Liverpool’s obvious defensive weaknesses and instead play to their strengths; allowing the Reds’ formidable attacking talents to have plenty of time on the ball.

The facts speak for themselves: Liverpool average more than two goals per game at Anfield this term, and so are capable of breaking down even the most dogged of defensive lines.

And don’t forget we’ve only conceded once in five league outings on home soil, and Southampton don’t appear to be a side capable of challenging that status quo.

It’s not a bet you’ll find yourself placing many times this season, but Liverpool to Win to Nil at 6/4 is a smart play here.

The Saints will do their utmost to keep things tight and cagey, and so while we expect a Liverpool win it might only be the odd goal. Certainly, at a price of 6/4, Under 2.5 Goals appeals.