It has been a week to forget for Liverpool FC, and one that has confirmed a rather glaring weakness in our armoury. Two matches at Anfield against teams that have come and parked the us have yielded just two points and a solitary goal; an indicator that, whether the ‘fab four’ of Coutinho, Mane, Salah and Firmino are selected or not, we simply have to be smarter in the manner in which we go about our business.

Against Everton, where Jurgen Klopp inexplicably rested some of our key attacking forces, we struggled to break down our resolute neighbours, and on Wednesday evening against West Brom a similar scenario unfolded.

Even with that fab four re-installed in the starting eleven, we simply could not find our way past the Baggies’ two banks of five and while the stats are enlightening – 71-29% possession, 5-1 shots on target – the reality is that, when all is said and done, these mean very little.

Maybe playing away from home suits us better. There is a certain expectancy on any home team – no matter their stature – to at least try and press forward, and the fact that Liverpool have scored plenty more goals on the road (20) than they have on home soil (14) in the Premier League this term speaks volumes.

The boys will need to find a way to crack the nut of defensive opposition at Anfield if we want to achieve a top-four finish, that’s for sure.

Happily, our next two games are away days with the first being this trip to the south coast on Sunday to take on Bournemouth. The Cherries are without a win in five, and look prime opposition against which the Reds can burst back to form.

Klopp picked the starting eleven we expected him to on Wednesday, which is a feat in itself given his penchant for a surprise selection or two, but now we must weight up the hectic festive schedule to come.

The Reds will play five games in the space of fourteen days, starting with the trip to Arsenal on December 22nd right through to the Merseyside derby in the FA Cup on January 5th.

So there will be plenty of chopping and changing to come, and picking the right players for the right matches will prove crucial.

As things stand, we can say that Joel Matip and Alberto Moreno will certainly miss this match with the Cherries. The former will be hoping to be back for the Arsenal game, while the latter has no immediate return date in sight.

Daniel Sturridge should be fit to play if required while Marko Grujic has a broken finger but can obviously play, so there are plenty of options at Klopp’s disposal.

With the date with the Gunners on the horizon – naturally a huge game in the context of the top four, we would expect him to play a ‘half and half’ style team against Bournemouth made up of first team regulars and fringe players.

How that will actually look is anybody’s guess! 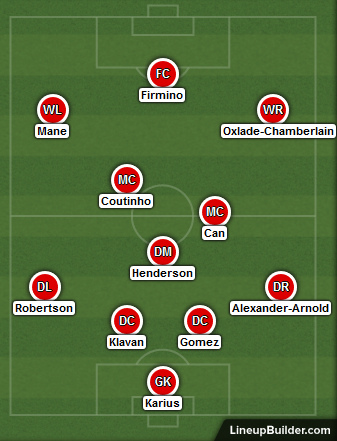 It’s amazing that Bournemouth are thirteenth in the Premier League table when you note that they have won just four of their seventeen matches this term.

How their current form looks depends on whether you are a glass half-full or half-empty kind of person: they’ve lost just two of their last seven (the optimist) or are without a win in five (the pessimist).

Basically, their formline reads W2 D3 L2, with that pair of victories coming back at the start of November.

The Cherries have been fairly disappointing at home this term, winning just twice in eight attempts in front of their own supporters.

The key factor in Liverpool’s away games this season has been goals….lots of ‘em. Our eight away days have yielded an extraordinary grand total of 37 goals, with 20 scored and 17 conceded (remember that nine of those came at Manchester City and Tottenham). Compare that to our home record – a total of 17 goals in nine games – and you get the idea.

Bournemouth’s home games are hardly goal-laden affairs – a total of 18 goals in eight games, but with Liverpool in town we would expect that record to be skewed somewhat.

The thing with the Cherries, however, is that they are not prolific in front of their own fans. Take out the anomaly of the 4-0 win over Huddersfield, and in six of their other seven home matches they have scored one or fewer.

The media can crucify our defence, but look at the bare facts:12 of the 17 goals we have conceded on the road have come either on the opening day of the season (3-3 at Watford) or against top four sides. Alas, we have just one clean sheet to our name on our travels.

All of these stats come with a point: we can expect Bournemouth to score once, but the Reds to score more. So from a betting perspective, here’s what we’re doing: back Liverpool to Win & Both Teams to Score at 2/1, plus the correct score lines of 2-1 and 3-1 at 8/1 and 11/1 respectively.