When he was quizzed on whether his side deserved their 2-1 win over Liverpool last week, Jose Mourinho’s response ranged from the defensive to the downright maniacal.

“If people don’t think we deserved it, I don’t care. I don’t care what people say,” he said, leaving the impression that he very much does care what people think. Either way, the undertone that was implicit in his defiance is that he knew he got away with one last Saturday.

Okay, so we weren’t at the races in the first half at Old Trafford, and Trent Alexander-Arnold’s occasional naivety at right back was ruthlessly exposed by Marcus Rashford on his way to a match-winning brace.

But the second half….well, it wasn’t even a contest, and how we managed to only find the net once will remain an eternal mystery. Mourinho and his team escaped with all three points, and they now have the number on the board in the race for second place in the Premier League.

It’s a frustrating result for Liverpool fans because we chose that game, of all of them, to turn in such a mediocre display. When a jet of water that unfortunately escaped Jamie Carragher’s mouth was headbutted by a 14-year-old United fan….well, it summed up the day as a whole.

There is at least a chance for immediate redemption this week against Watford at Anfield in one of only a handful Premier League fixtures (it’s FA Cup quarter-final weekend). Three points on the board here and we can watch with relish as our rivals’ own fixture lists get rather more crammed in the coming weeks.

The only silver lining from Saturday’s debacle was that there were no new injury concerns, so Jurgen Klopp at least has a full deck to choose from here barring Nathaniel Clyne, who is back in training but some way short of match fitness.

We envisage two changes at the back. As mentioned, Alexander-Arnold was shown up twice by Rashford for United’s goals, and while that is only a small reflection of a fine young player, now is the time for the more composed Joe Gomez to stake his place for a first team berth.

And, not for the first time, Dejan Lovren was completely overpowered by an opposition frontman. First Harry Kane in the humbling at Wembley and now Romelu Lukaku have both had the Croatian on toast. Watford’s Troy Deeney is cut from a similarly physical cloth, and so restoring Joel Matip at centre back is the kindest thing to do.

The other thing we know about the Hornets is that they are a supremely competitive side in midfield too, and so we will need to front up in this department with strength and agility of our own. It’s possible that Gigi Wijnaldum will get the nod then, alongside Jordan Henderson and Emre Can.

Up front….well, you know the drill by now. 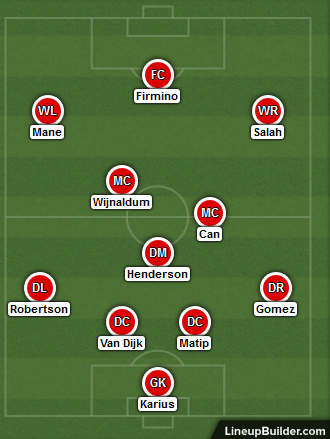 After a shaky start under his stewardship, Watford are starting to get to grips with the demands placed upon them by new boss Javi Gracia, and their form has improved accordingly.

That said, there is a clear disparity in their recent results. While the Hornets have won three on the bounce at their Vicarage Road home, they are without a win in eight on the road: a run that includes seven defeats.

Those with a long memory will recall our thrilling 3-3 draw with Watford on the opening day of the season, and those with an even better memory may recall our 6-1 trousering of the Hornets the last time we met at Anfield in November 2016.

Encounters between us are rarely dull, but this Watford side is proving to be a little circumspect on the road. They have scored just two goals in their last eight on the road, including four blanks in a row just lately, and so we have to expect Liverpool to run out straightforward winners here.

Unfortunately, the bookmakers aren’t daft and have the Reds pegged as 1/5 favourites here!

So we need to look elsewhere for our betting value, and it might just come in assuming that the Hornets will fail to find the net once again.

We’ve been good defensively at home this term, conceding just ten goals in fifteen league outings at Anfield, and eight of our twelve clean sheets have come on Merseyside.

Of course, monopolising possession limits our opponents’’ chances of coring, and assuming the Klopp solidifies the backline with Gomez, Matip and co there is no reason why we can’t repeat the feat on Saturday.