And so the biggest week of Liverpool’s season begins. The meat of the sandwich is the Merseyside derby on Saturday, but on this occasion the bread is the tastiest morsel on the menu; the Champions League quarter-final clash with Manchester City, with the first leg at Anfield on Wednesday and the second at the City of Manchester Stadium next Tuesday.

It is a week which will define what we achieve in 2017/18; a time for heroes in red to stand up and be counted. History awaits, and you do sense that this Liverpool side is on the cusp of something rather extraordinary.

Forget the 0-5 defeat in the Premier League fixture way back in September; we were cruelly reduced to ten men that day when Sadio Mane was sent off, and lest we forget at that point the Reds were on top in the game.

Instead, focus on the thrilling 4-3 win for Liverpool over City at Anfield in January. That was Pep Guardiola’s first league defeat of the campaign, and look how our complete commitment to playing front-foot football – and making no concession to City’s own galaxy of attacking stars – paid dividends. Remember, we were 4-1 up with six minutes to play; this was a complete and utter demolition.

There was no magic or sorcery involved: we played the same system, and largely the same personnel, as we have all season, it was just that City’s backline could not cope with the pace and guile of our front three, who were ably supported by Alex Oxlade-Chamberlain. Let’s hope that lightning strikes twice on Wednesday.

At least we have prepared for the clash in the best possible way with a 2-1 win over Crystal Palace on Saturday. Okay, so it was far from a perfect performance, but winning after going a goal down early is a sign of tremendous character. The fact that Mane and Wijnaldum were withdrawn after just an hour could be beneficial given the quick turnaround of matches, too.

And so the scene is set for another classic night of European football at Afield. If we can summon up the same fervent atmosphere as we have done countless times in the past in this competition, there is no reason why we can’t secure a positive result heading into the second leg.

There are two potential enforced changes for Jurgen Klopp to mull over. Joe Gomez almost certainly won’t feature, and so Trent Alexander-Arnold is the obvious replacement. That will be a concern for anyone who saw the young right back torn to shreds by Marcus Rashford in our defeat to United a couple of weeks ago; especially as he will be up against Leroy Sane (and Raheem Sterling if they switch flanks).

But as we’ve mentioned, Klopp made no concessions to try and disrupt City’s attacking play in that league fixture, and so we have no reason to think he’ll change that philosophy on Wednesday.

The other change, as it were, is Emre Can, who continues to struggle with a back problem picked up on international duty. He would presumably have been selected if fit, which presents a selection dilemma for the manager.

You would presume that Jordan Henderson and Alex Oxlade-Chamberlain are confirmed starters, and so the other midfield spot will be contested by Wijnaldum and James Milner. Perhaps the latter, with one eye on silencing Kevin de Bruyne and David Silva, will be deployed.

Otherwise, it’s business as usual for the Reds. 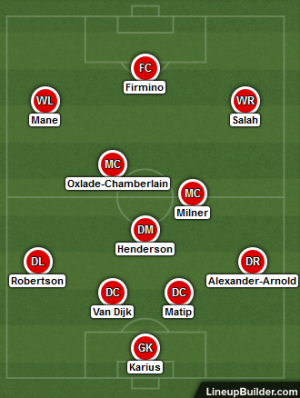 Pep Guardiola’s side returned from the international break with a comfortable 3-1 win over Everton thanks to goals from Leroy Sane, Gabriel Jesus and Raheem Sterling.

That was their fifth Premier League win on the spin, and more troubling is that they have scored three or more in a trio of those.

Other than their loss to us in January, City’s other defeats this term have come in Champions League dead rubbers and the curious reverse at the hands of Wigan in the FA Cup.

It is such a tough game to call this, and honestly against who else would you see Liverpool as a 2/1 outsider at home!?

Rather than tackling the result market – because, let’s face it, all three results are possible – it might be best to stick to the goals-related markets instead.

Manchester City have a slight injury concern over Aymeric Laporte, who is, arguably, their best centre back. If he isn’t fit to start on Wednesday then that hands the Reds a real edge, and as we’ve seen in the two fixtures between the sides this term goals are rarely far away.