So here we are then: the game that will ultimately define our season. Has the hard work been done? Yes, the foundations are laid, but there is still plenty of work to be done.

Manchester City have so much goal power that we simply cannot rest on our laurels, although of course the knowledge that they will need to score five times if we net once at least takes some of the pressure off.

We can fear a backlash, of sorts. City have lost twice in the space of four days, conceding six times, having gone on an almost perfect run for the eight months prior. The anguish they will have felt in letting a two-goal lead slip against their bitter Mancunian rivals could have a hangover effect too, so are they starting to feel the pressure of competing for league and continental glory?

Probably not – Pep Guardiola is too shrewd a campaigner for that – but the knowledge that his side have conceded at least once in seven of their last ten home games will trouble him and delight Reds fans.

We will be given a rather torrid reception by the City fans, no doubt, and we can expect more tomfoolery when the team buses arrive at the ground. The game will be played at a million miles an hour, too, but there will be nothing to scare the players on Tuesday. We have beaten Guardiola’s men twice this term playing on the counter, and there’s absolutely no reason why we can’t make it a hat-trick this week.

If you are wondering why we haven’t made mention of the Everton game yet….well, there isn’t much to say! In making such wholesale changes to his starting eleven, Jurgen Klopp was always likely to witness a disjointed performance from his side – especially given the lack of game time the likes of Nathaniel Clyne, Ragnar Klavan and Danny Ings have had.

It was a nice tune up for them, and it ensured our key names remain fit and fresh for Tuesday’s assignment against City. To that extent, the draw with the Toffees was a case of job done.

You would hope that the absence of Mo Salah on Saturday was a precautionary measure, and one designed to keep him in top shape ahead of this fixture. According to Klopp he was touch-and-go to start against Everton, and that is surely a good sign in his battle to overcome a groin tweak.

Andy Robertson picked up a knock against City in the first leg but is expected to be okay for Tuesday; we certainly hope so, anyway, given that Alberto Moreno got injured in the warm-up ahead of the Everton game.

Matip, Gomez and Lallana are definitely out of course, and question marks linger over Emre Can – the insinuation from the BBC is that his back injury is more serious than first feared.

With Jordan Henderson out suspended, the starting eleven pretty much picks itself! 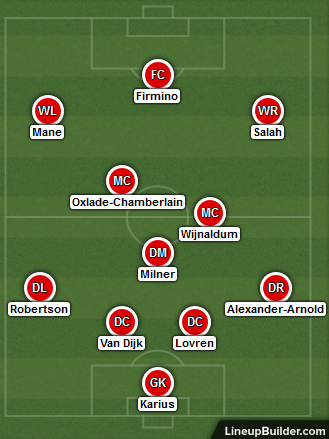 It’s not been the best of week’s for Manchester City, which is perhaps the understatement of the football season!

You sense they would have accepted a 1-3 defeat on Wednesday night; that away goal would have at least given them something to cling on to. As it was, they drew a very rare blank.

And then to Saturday….two-nil up at half-time and cruising to the Premier League title. At this point, Manchester United were unlucky to have nought.

What happened at half-time is anybody’s guess, but United – and Paul Pogba in particular – came out like a team possessed in the second period. What was noticeable was how City’s defensive standards slipped, and Nicolas Otamendi in particular had a torrid time.

What did we say before the first leg of our tie with City….attack their defence, because it ain’t all that!

The good thing with these two managers is that they won’t back down from their normal attacking philosophies no matter what the circumstances. The upshot for punters, of course, is that goals are highly likely.

Manchester City will give this a right good go, and they will have belief that they can put a few past Liverpool on Tuesday.

But the very real threat of a Liverpool goal kills the tie, by all accounts, and our natural instinct to play on the break sits very nicely with that narrative.

Liverpool can be backed at 5/1 to win this match – and there will be plenty who tuck into that given City’s recent struggles.

But, like last week’s first leg, backing the goals-based markets is preferable to the standard 1-X-2 outcome; quite frankly, all three results are viable!

It might not have landed in the first leg, but Both Teams to Score & Over 2.5 Goals is still the percentage play at 8/11.