The summer heatwave has been a godsend for some, a disaster for others, but there can be no doubting the sizzling work done by Jurgen Klopp and his recruitment team in the transfer window.

Lacking a solid, dependable goalkeeper? No problem: in comes Alisson, the former Roma man who keeps Ederson out of the Brazilian national side.

Lack of athleticism in midfield? Easy: in come Naby Keita and Fabinho, two excellent options who have pace, power and guile in abundance.

No cover on the right flank to allow Mo Salah to have a rest every once in a while? Simple: we’ll snap up the occasionally brilliant Xherdan Shaqiri as a quality alternative to the Egyptian.

Add into the mix the return of Divock Origi and Lazar Markovic, and the return to full fitness of Joe Gomez and Adam Lallana, and suddenly the Reds have a squad capable of challenging on multiple fronts.

Ideally, it’s a season that would end with multiple pieces of silverware, although lifting the Premier League trophy come next May would suffice!

The journey to that end starts on Sunday against West Ham at Anfield, and clearly the onus here is on three points in the bag early doors.

The World Cup has presented problems for a number of top flight sides, with players given holidays and enforced breaks to recover from their summer exertions, and Liverpool are no different.

Dejan Lovren only returned to training on Monday after he helped Croatia to the final, and it would appear as though he will not be risked on Sunday.

Ragnar Klavan and Joel Matip are both injured as well, so young Nathaniel Phillips deputised at centre back against Torino last time out.

Joe Gomez is expected to be fit, however, and he could slot into the centre of defence alongside Virgil van Dijk.

You would expect Alisson to make his Premier League debut between the sticks, while the midfield three will need some figuring out. Jordan Henderson played 20 minutes against Torino but that was his only appearance in pre-season, so he perhaps won’t be risked against the Hammers.

Getting the balance right could be key, so expect Fabinho – who Klopp has trusted with the holding role in pre-season, to feature alongside the energetic Naby Keita and quite possibly Gigi Wijnaldum, who netted in friendlies against both Torino and Napoli.

The holy trinity of Salah, Firmino and Mane should take their places up front, but watch out for a cameo from Daniel Sturridge, who looks to be a man reborn (again) after a fine pre-season. 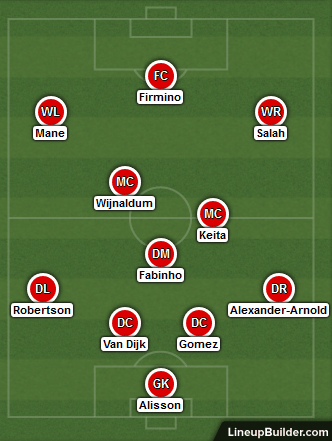 You can only read so much into pre-season friendlies, of course, but West Ham’s preparations have been solid and low key.

Wins over Angers, Ipswich and Aston Villa and draws against Preston and Mainz highlight a team just trying to click under a new boss, Manuel Pellegrini, and with a couple of high profile players to bed in.

Felipe Anderson and Andriy Yarmolenko should improve the Hammers’ attacking output straight away, and that should allow West Ham to challenge meaningfully for a top half finish this term.

These early fixtures are about hitting the ground running; if you don’t, a shock result is not beyond the realms of possibility.

The majority of Liverpool’s squad is rested and eager to go, and if they show the same levels of dynamism on Sunday as they have in the friendlies then we should thrive.

The goals have been flying in, with a combined 14 against Manchesters City and United, Torino and Napoli a handy indicator of how strong we are heading into the new campaign.

If we look back to the start of last season, on the opening weekend only 30% of Premier League matches witnessed both teams scoring, which confirms that one side or the other enjoyed the best of things in the majority of cases.

Mind you, there were barnburners at Arsenal (4-3), Watford (you may recall the 3-3 draw) and Chelsea (2-3), which reminds us that sometimes certain sides aren’t quite up to scratch from a defensive perspective.

To help make the first weekend one to remember, how about a flutter on Gigi Wijnaldum to score anytime at 9/2. Okay, so he’s not a certain starter, but Klopp has shown faith in him before and the Dutchman has been firing well in pre-season.