You would have to go back months – years even – to find the last time that Liverpool failed to register a single shot on target in a football match. But that’s exactly what happened in Naples on Tuesday, when the Reds toiled to a 0-1 defeat at the hands of Napoli in the Champions League.

In truth we never looked like creating anything, and while the nature of the Italians’ winner was cruel – a 90th minute strike from Lorenzo Insigne – in reality it was probably no less than they deserved.

Jurgen Klopp came out afterwards and said that his players ‘only had themselves to blame’.

“There’s no problem, the boys did a brilliant job tonight. They tried everything and were really busy, but not smart enough or calm enough in the right moments.

“When that happens, you lose football games.”

It is perhaps rather telling that Alisson, Virgil van Dijk and Joe Gomez were our best performers on the night, and barring the odd through ball to Sadio Mane and Mo Salah, our attacking players were almost wholly anonymous.

They weren’t aided by the early departure of Naby Keita, who was stretchered off as early as the 19th minute. The good news is that the diagnosis of his injury – a stiff back – is a lot less severe than first feared.

These things happen in football, and now the mission is to regroup ahead of Sunday’s key Premier League clash with Manchester City. Titles aren’t won or lost this early in the campaign, but defeat for either side at Anfield would be an early blow to their chances.

Early reports suggest that Keita could be fit to take on Manchester City, although you’d be surprised if he started if anything less than 100%.

In which case, a midfield three of Jordan Henderson, James Milner and Gigi Wijnaldum picks itself.

Alisson continues in goal and, presuming no knocks are reported, Trent Alexander-Arnold and Andy Robertson will continue at full back.

Has Joe Gomez become Klopp’s first choice partner for Virgil van Dijk at centre back? He’s keeping Dejan Lovren and Joel Matip out of the starting eleven at the moment, with Lovren likely to be given this week off as well so that he can work on his fitness during the international break.

Up front, it’s time for the big three of Roberto Firmino, Mo Salah and Sadio Mane to show their teeth. 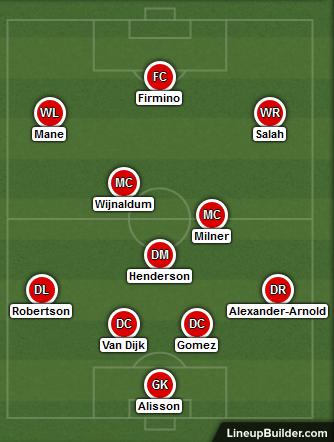 Ultra optimists might just argue that Manchester City are there for the taking.

They dropped points at Wolves, lost to Lyon in their Champions League opener and conceded an early goal against Hoffenheim on Tuesday.

But the bigger picture is that City, even without Kevin de Bruyne, are arguably as strong as ever.

It would be fair to surmise that Liverpool had the wood on Manchester City last season.

Forget the 0-5 defeat at the City of Manchester Stadium; whether you agree with the decision or not, that was a game that ended as a contest when Mane was sent off for that high boot on Ederson. Nobody beats Man City with ten men.

Otherwise, look at the results in the Premier and Champions League: 4-3, 3-0 and 2-1 victories for the Reds.

How much stock can punters put in head-to-head statistics? If you trawling through history not much, but the fact that the matches above took place within the last year or so, with pretty much the same set of players, the same managers and similar systems were deployed, we might argue that they hold some weight.

As such, you would expect goals to rain down on Anfield; the bookies certainly do anyway. They have made Over 2.5 Goals almost unbackable at 8/13, so value punters are instead guided towards Over 2.5 Goals & Both Teams to Score at a more agreeable 5/6.

We know that both teams are betting going forward than they are defensively, and City’s issues may be exacerbated by injury problems at left back. Both Benjamin Mendy and Fabian Delph are struggling with injuries, and so Aymeric Laporte may have to shuffle across to full back. That’s not ideal for them.

If Manchester City are struggling on the left flank, that has to be good news for our right winger….one M. Salah esq. The Egyptian has not been at his best this term, but the great players always come to the party on the big occasion.

If time reveals Salah to be a true great, it is matches like this where he will make his greatest mark. He can be backed at 13/10 to score anytime here.