It came as something of a surprise when Jurgen Klopp named a starting eleven as close to his strongest available as possible against Newcastle on Boxing Day.

With games coming up against Arsenal and Manchester City in the next week, surely the manager would have been better placed to rest key figures for such sterner tests?

Well, the proof of the pudding is in the eating, as they say, and our 4-0 triumph over the Magpies – allied to City’s 1-2 defeat at Leicester – means that we are now six points clear at the summit of the Premier League table. Klopp can afford himself one of those winning smiles.

Any fears of a turkey-based hangover were thrown to the wolves rather early against Newcastle, when the unlikeliest of source in Dejan Lovren opened the scoring in the eleventh minute with a well-executed strike.

The visitors regrouped and made life difficult for the Reds, but the game was over as a contest shortly after half-time when Mo Salah dusted himself down to score from the penalty spot after being fouled by Paul Dummett.

As the news filtered through of City’s surprising demise in the East Midlands, there was a feeling of relaxation and celebration on the Anfield terraces as Xherdan Shaqiri notched a third and Fabinho completed the scoring with a header.

It was a performance of consummate professionalism, even if the manager wasn’t overly happy with his side’s efforts early on. “The start of the game offensively was very lively, defensively a bit in between. I didn’t like it too much,” he said.

“But apart from that the whole game was really good. We could’ve scored more, the chances were there with fantastic movements. Right to the end, we were wanting to control the game but still wanted to score.”

And so we move on to Saturday’s clash with Arsenal, which is always one of the more aesthetically-pleasing Premier League encounters. Will Klopp shuffle his pack for this one, knowing that we could ‘bury’ Manchester City’s title hopes next Thursday?

There will be some weary legs in the camp, but Klopp will request a couple more big efforts in the coming weeks to cement our spot as likely title winners.

The two centre halves – Virgil van Dijk and Dejan Lovren – pick themselves on account of the fact there are no other options, an the manager surely won’t tinker with formations against an Arsenal side who attack with relish.

Trent Alexander-Arnold played 90 minutes against Newcastle on his return from injury, and it will be a tough ask for him to start less than 72 hours later against the Gunners. Nathaniel Clyne stands by to deputise.

On the left, can Andy Robertson go to the well once more? He may have to, with a break potentially upcoming during FA Cup week for the Scot.

It’s unlikely that Jordan Henderson will be able to start again so soon after the Newcastle game, so fingers are crossed that James Milner is fit to return. The midfielder missed the Magpies clash with a minor muscular concern, with Klopp saying ‘it’s not that serious, but still serious enough to put him out of the squad today [Wednesday]’, so the hope is that he will be ready for Saturday.

Gigi Wijnaldum and Fabinho could also start in midfield – they played 60 and 30 minutes respectively against the Magpies, although there might be a call for the more energetic Naby Keita to come into the side.

It’s decisions, decisions in attack; Salah and Sadio Mane could do with a breather at some point, while Bobby Firmino was removed after 70 minutes on Wednesday. The manager may tweak his newly favoured 4-2-3-1 system accordingly. 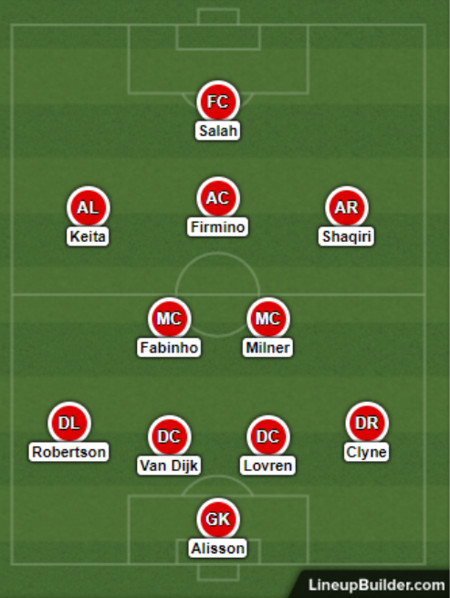 It’s a case of lies, damn lies and statistics for Arsenal this season.

They haven’t made any real strides under Unai Emery, who deserves time to mould a side of his own making, and in fifth place they haven’t really closed the gap on the leaders.

What’s more, pertinently, they have won less than 50% of their away games (four of nine) and conceded 16 in the same, which highlights a real vulnerability on their travels.

That was displayed in all its glory in their 1-1 draw at Brighton on Boxing Day, where they played lots of pretty football without really ever looking that likely.

There are shades of Liverpool 2017/18 about this Arsenal side, who attack with real ferocity but look rather hapless in defence.

They’ve kept just one clean sheet since September, and yet have scored at least once in every league game they have played since the opening day of the campaign.

Emery won’t change his side’s modus operandi on Saturday, and so we anticipate plenty of goalmouth action at both ends of the Anfield pitch.

The Gunners shipped two or more goals in games against Manchester City and United, Tottenham and Chelsea, and we expect Liverpool to maintain that tradition here.

It’s an obvious bet but a goodie: Liverpool to Win & Over 2.5 Goals has to be the play at Evens.