Bottler, choker….and many more words that were slightly more graphic in nature.It’s amazing how one ‘poor’ result is perceived by the wider football community, especially when said ‘poor’ result came away at a West Ham side that has already beaten Manchester United and Arsenal at home and taken points off Chelsea.

The point taken from the 1-1 draw kept us at the summit of the Premier League, and while we were bumped down by Manchester City’s 2-0 victory at Everton that’s only on goal difference, and so we can go three clear again with a win over Bournemouth on Saturday.

In fairness, the performance level was below-par against the Hammers, and a disjointed effort was not helped when Jordan Henderson, Gini Wijnaldum and Dejan Lovren all pulled up lame on the eve of the match.

“Last night we trained and after we had to change three positions,” Jurgen Klopp said afterwards. “It’s just a fact, it’s not an excuse. The preparation for the game was far from being perfect and we still got a point.”

Adam Lallana and Naby Keita didn’t gel in the middle of the park, and a lack of creative emphasis from midfield have a knock-on effect up front, with messrs Salah, Firmino and Mane not looking their usual selves.

And it was a rare moment of defensive fragility that allowed Michail Antonio to wriggle clear and net the hosts’ equaliser.

Still, we take the point and go again: this is a title race played out over 38 games, and nothing is won or lost in a single evening.

A straightforward win on Saturday and our so-called calamity in the capital will be quickly forgotten.

There has been lots of bad news on the injury front of late, and the fact that Joe Gomez’s fractured leg requires surgery is just the latest.

He and Alex Oxlade-Chamberlain will slowly, but surely, work their way back to fitness, and hopefully be back in time for the campaign’s final throes.

More immediately, Dejan Lovren’s hamstring strain could keep him sidelined for a while, but at least Virgil van Dijk and James Milner – both struggling with illness over the weekend – have extra recovery time.

Both Gini Wijnaldum (sore knee) and Jordan Henderson (muscle strain) could be considered doubts for the trip of the Cherries. “Gini and Hendo, both would’ve played and then they cannot play. That’s not too cool, I don’t know how long it will take,” Klopp told the club’s official website.

There’s a more positive prognosis for Trent Alexander-Arnold, who is expected to return to full training today. He may just be drafted in to the starting eleven in time for Saturday. 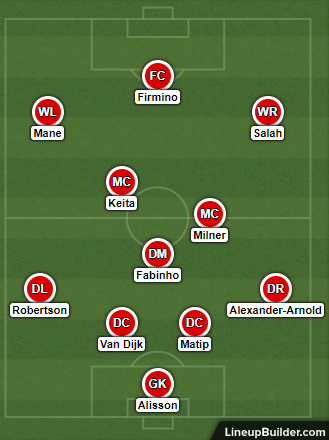 Bournemouth are a perfectly solid side on home soil, as evidenced by a record of W7 D3 L3.

But get them on the road and they don’t seem to be able to get anything going. They’ve lost nine of their twelve away dates and concede on average more than two goals per game on their travels.

The Cherries are currently on a seven-game losing streak away from home in the Premier League.

We are anticipating a quick return to winning ways for Liverpool here.

Our form at Anfield is outstanding, Bournemouth’s away form is terrible, and when you put those two things together you should expect a victory for the home side.

Hopefully, preparations will go a lot smoother here than for the West Ham tie, and Klopp can name something approaching his strongest starting eleven – barring those absentees through injury.

Our front three remain fit and raring to go, while we expect a stronger showing from either Keita or Lallana – whoever starts – in the number eight role.

Bournemouth’s 4-4-1-1 system is quite expansive and does allow space in the middle of the park, and this is an area we will need to exploit.

The Cherries, who have scored just three goals in their last seven away dates, will also be without the injured Callum Wilson and David Brooks, two of their premier attacking players.

We’re expecting Liverpool to win, and Bournemouth struggle to find the net on the road. A plan is emerging….

We can back the Reds to win to nil at 11/10 with a number of different bookmakers, but how about we try and maximise our return by backing a Correct Score double: Liverpool to win 2-0 and 3-0 at 13/2 and 7/1 respectively.