We had queried in our preview of the game whether our proficiency on the counter attack might be the difference between the two sides when Liverpool and Bayern Munich locked horns in their Champions League last 16 second leg encounter, and we’re happy to say we were proven right!

The Reds sat deep and narrow in an attempt to spoil the Germans’ attacking forays, with James Milner, Gini Wijnaldum and Fabinho – on early for the injured Jordan Henderson – putting in a colossal shift in midfield.

One such break led to our first goal: Virgil van Dijk’s long ball brought under control by Sadio Mane, who benefitted from a confused Manuel Neuer charging from his goal to fire us into the lead.

At this point, Bayern needed to score twice to win the tie, and they were given a helping hand when Joel Matip could only bundle into his own net towards the end of the first half.

We might have expected wave after wave of Bayern attacks after the break, but they never really materialised, so well marshalled were we by the midfield trio.

And Milner turned provider after 69 minutes, floating in a corner that Van Dijk rose highest to meet and guide home.

Again, resistance was barely forthcoming from the hosts, and the Reds added some gloss to the scoreline when Mo Salah lifted a pinpoint cross on to the head of Mane, who nodded home his tenth goal in as many games.

We’re into the quarter finals of the Champions League for the second successive year – among four English teams to reach the last eight – and given our abilities to dominate at home and counter attack so well away, we must be considered one of the favourites to lift the trophy.

Mind you, there’s another competition that deserves our full attention…

We return to Premier League duty at Fulham on Sunday, and victory there would take us back to the summit of the table with Manchester City in FA Cup action.

After our magnificence in Munich, Jurgen Klopp must raise his troops once more to deliver a winning performance against a poor Fulham outfit.

It’s always a concern when a player is taken off just 13 minutes into a game – especially when it’s a player with such a chequered injury record as Jordan Henderson – but the good news is that the problem isn’t as serious as first feared.

The midfielder twisted his ankle in Munich, but shouldn’t be sidelined for too long according to Klopp, who told the official club website: “It’s Hendo so he’s a hard one, but we have to see, of course. It looks hopefully not that serious, but for tonight we had to change.”

Naby Keita has also picked up a muscle injury, and he is rated as doubtful for Sunday’s trip to Craven Cottage.

The good news is that Joe Gomez is now back in full training following his broken leg, and he is expected to return to first team plans after the international break.

The question now is will Klopp rest players on Sunday following the exertions in Germany? We hope he doesn’t, as the chance to go two points clear at the top of the Premier League will help to exert more pressure on Manchester City. 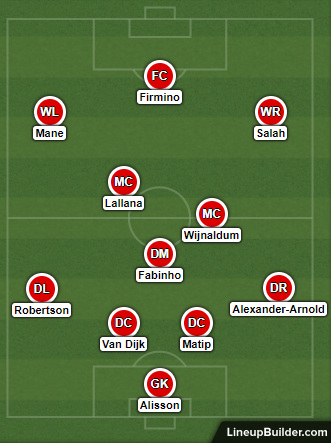 Fulham’s return to the top flight has been an almighty struggle, with the club already going through two managers in an attempt to find a winning formula.

Instead, they’ve lost nine of their last ten and look doomed for an instant return to the Championship.

A word of caution, however: the Cottagers’ home form (W4 D3 L7) isn’t a complete disaster, and so our boys will need to be up for the challenge on Sunday.

You already know the drill here: Liverpool are a red-hot favourite at 2/7 with the bookmakers.

Oddly enough, that isn’t the worst price in the world – especially when we factor in the Reds can be backed with a -1 goal handicap at 3/4.

Fulham have conceded two or more goals in each of their last ten games; being poor defensively isn’t a phase for them, it’s an epidemic, and we really could run riot if the players are motivated after their midweek adventure.

And so our value bet is simple: Liverpool to score in both halves at a princely price of 10/11.

Can a case be made for Fulham? Not really, and only their most optimistic of fans would wager otherwise.