It’s not been the best of weeks for Liverpool Football Club. We were sitting pretty after blasting Huddersfield Town 5-0 last Friday, and we watched on with glee as Manchester City faced a tough trip to Burnley on Sunday.

A nervy first half for Pep Guardiola’s men raised our hopes even higher, but they just about found a way to win when Sergio Aguero slammed home to secure a 1-0 victory. Advantage City in the race for the Premier League title, perhaps.

And then it was off to Barcelona on Wednesday for the Champions League semi final first leg in the Nou Camp. A close result, aided by an away goal, was what the doctor ordered.

Sadly, that is not how things panned out as Lionel Messi once again proved why he’s one of the greatest ever to lace up a pair of boots.

The Argentine slotted home Barca’s second after Luis Suarez had given his side the lead, before Messi curled home a sublime free kick that no keeper on the planet would have saved to make it 3-0 to the hosts.

But this wasn’t any old 3-0 towelling. The Liverpool players excelled themselves, performed admirably and created a couple of decent chances; Bobby Firmino having a shot cleared off the line, Mo Salah hitting the post and Sadio Mane blazing over just three such examples.

Indeed, Jurgen Klopp said afterwards that he didn’t think his players could have done any more. “I don’t know if we can play much better,” the manager reflected. “I think it was the best away game in the Champions League – not only this year, last year included.

“I told the boys I’m proud of how we played. Against a side like this, playing this kind of football, I was completely happy.”

But for now, we must park the Champions League and focus on the task in hand: taking six points from our remaining Premier League matches.

First up is a trip to Newcastle United on Saturday, and a chance to impart some pressure on City, who have to wait until Monday for their tough-enough trip to Leicester.

It would be fair to say that Klopp raised a few eyebrows with his team selection for the Barcelona game.

In theory, Joe Gomez coming in at right back for Trent Alexander-Arnold makes sense: the former is arguably the better defender.

But a lack of game time seemed to catch up with him as he faced the dual threat of Philippe Coutinho and Jordi Alba.

There was a change of shape too, with a midfield diamond deployed to shut down the amount of space afforded to Barcelona in the middle of the pitch.

That meant that Firmino was rested with Gini Wijnaldum given the task of supporting Salah and Mane in attack.

It worked, to some extent, and ensures that the Brazilian will be chomping at the bit on Saturday.

Naby Keita limped off after 24 minutes to be replaced by Jordan Henderson, and it’s unlikely he will be seen again this term. 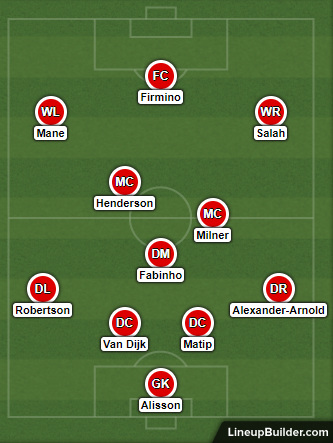 A strong end to the campaign has secured Newcastle’s top flight status for another season, and now the Magpies will be eyeing an eleventh place finish that would be a real achievement for Rafa Benitez and his players.

Since the start of 2019, Newcastle’s form reads W7 D3 L6 – that’s 1.50 points per game on average, a return which would see them finish seventh if carried across the course of a campaign. As such, they should not be underestimated.

In their last three they have beaten Leicester and Southampton and drawn with Brighton, although their record against top six teams this term – W1 D0 L9 – suggests we should be full of confidence.

Assuming the lads aren’t suffering with any hangover from their midweek exertions, we have nothing to fear from a trip to Tyneside.

We’ve won seven in a row, scoring 20 goals in the process and conceding just five, so why wouldn’t we be a strong favourite to triumph once more?

Our price of 4/11 with the bookies is about fair, with Newcastle scoring one or fewer goals in four of their last five matches. You would expect the Reds to find the net at least twice here given our recent form.

There’s not much value to be had in the outright markets, but how about a look at the Anytime Goalscorer market, where Bobby Firmino is a mouth-watering 8/5.

The Brazilian will have been hurt to have been left out against Barcelona, and he will surely have the bit between his teeth here.

Post Tags:
Homepage » Match Previews » Newcastle United vs Liverpool Betting Tips (26/04/19) – Red to Hold Up Their End of the Bargain in the North East