There’s the old footballing proverb of the ‘routine victory’, which often turns out to be anything but.

The cliché gets dusted off whenever a team that is high up in the league meets one towards the bottom, especially on home soil, in what should prove to be a straightforward three points.

That was the case when Liverpool met Watford on Saturday, although the notion does have a habit of rogeting that sides likes the Hornets are fighting for their lives and tend to give it everything they have got.

So far, however, we have not succumbed to the footballing nightmare of complacency, with the Reds taking the opportunity to extend their lead at the top of the Premier League with – yep – a routine 2-0 victory.

A double from Mo Salah did the damage, although Watford weren’t without their moments. Sadio Mane’s cruelly disallowed goal by VAR would have added the icing on the cake, but in a week where we play twice in barely 24 hours it was the perfect tonic at Anfield.

So yes, we embark on a historic week in which history could be made. First up are Aston Villa in the Carabao Cup quarter-finals on Tuesday, followed by the Club World Cup game with Mexican outfit Monterrey in Dubai on Wednesday.

And you thought your Christmas schedule was busy!

It was a bit of a conundrum for Jurgen Klopp to figure out this week given that, despite his range of skills, he is not able to be in two places at once.

And so he has taken the decision to fly to Qatar with pretty much his strongest available squad, leaving behind a blend of fringe players and youngsters for this cup tie with Aston Villa.

The position in the dugout will be taken by Under-23s boss Neil Critchley, and you suspect he will have many of his normal charges on show in his debut as the senior side’s manager.

Klopp has taken all of the fit and available senior squad to the Middle East, as well as two players who might have featured in the Midlands in Curtis Jones and Neco Williams.

Rhian Brewster and Harvey Elliott, who were originally named in the touring party, will instead be made available to Critchley on Tuesday.

“We had to do it like this. I think it’s a really nice opportunity for the younger players to face that [the cup tie with Villa],” Klopp said by way of explanation. “I’m not sure if you say it like this in England but if you ‘grow above yourself’ and make the next step and enjoy the challenge.

“I would love to be part of that game, to be honest, and I hope all the boys and Critch and the coaching staff enjoy it as well, whatever happens.”

It will be a tough ask for the young guns in question, and this is something like how we expect the Reds to line up: 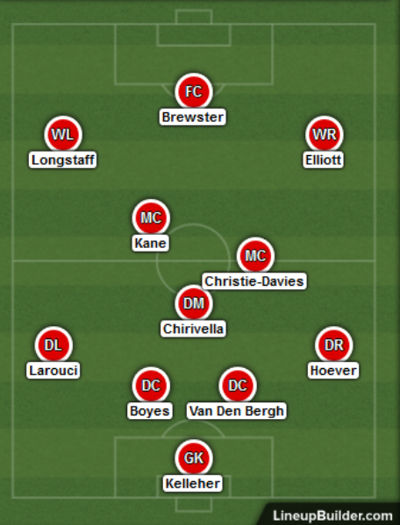 After a excellent start to life in the Premier League this term, Aston Villa have fallen on hard times since.

They’ve now lost six of their last eight outings, although in that run they have played each of the top four sides, so there is some mitigation to factor in.

At the weekend they lost 0-2 at Sheffield United, and at times they looked completely devoid of confidence in possession.

However, they are the highest scoring team in the bottom half of the table, and Dean Smith will be very ken indeed to win this game and will pick a strong side accordingly.

You’ll probably ever see odds quite like this ever again: Aston Villa are the 1/4 favourites to beat Liverpool in a football match.

Of course, that takes into consideration that we will be fielding what is essentially a youth team at Villa Park, with an average age of barely 21.

The Villains will be desperate to win as well to try and reignite their campaign, and so our advice for travelling Reds fans is to be realistic and enjoy your first glimpse of the next generation of Liverpool stars.

To try and minimise the blow of a likely defeat, you can always look to profit by backing Villa with a -1 goal handicap at odds of 8/11.