Ordinarily, a trip to the Middle East in mid-winter is used as an exercise – or excuse – to get some warm weather training in while enabling players to essentially put their feet up. But for Liverpool, two intense games in the space of 72 hours put paid to any notion of a mid-season jolly. Mind you, being crowned the best club team in the world will provide some crumb of comfort to the lads….

Liverpool won the Club World Cup in Doha on Saturday, with an extra time goal from Bobby Firmino enough to break the hearts of Brazilian outfit Flamengo.

Ironically, Firmino had missed a sitter as early as the first minute, while Trent Alexander-Arnold and Naby Keita also failed to covert early chances as we looked to put the game to bed as early as possible.

Boosted by the return of Virgil van Dijk after illness, we were rarely troubled defensively and indeed could have won comfortably in normal time with Firmino also hitting a post and Mo Salah going so close himself.

And then, in injury time, Sadio Mane was felled in the penalty area and the spot kick was given – before the referee checked the pitch-side monitor and overturned his original decision.

It looked like it was going to be one of those frustrating days for the Reds, but Firmino popped up in the 99th minute to finally net the winner and see us crowned the best in the business – richly deserved, you might agree.

The players touched down in Merseyside on Sunday to prepare for a hectic festive fixture list that starts with Boxing Day’s trip to the Midlands to take on Leicester.

The Foxes will be hurting after their defeat to Manchester City on Saturday, and will also be reflecting on what happened when the two sides met at Anfield earlier in the campaign when we won courtesy of a controversial late penalty.

We very much need to refocus after our exploits in the desert, because Leicester would love nothing more than to bring us back down to earth with a bang….

The trip to the Middle East was not without its injury casualties….

Thankfully, Virgil van Dijk seems to have shaken off the illness that saw him miss the Monterrey game, but Alex Oxlade-Chamberlain fell awkwardly in Saturday’s final and appears to have hurt his ankle.

The likes of Matip, Lovren and Fabinho are also still sidelined, but Gini Wijnaldum appears to have shaken off his own injury woe and is in-line for a return here.

Jurgen Klopp will ask for one big effort here from his players before making changes to his starting eleven against Wolves on Sunday. 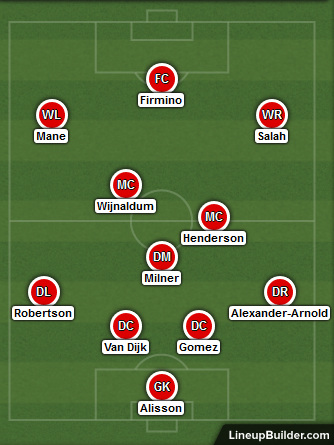 After playing so well all season, the 1-3 defeat at Manchester City on Saturday will have hurt Leicester like crazy.

They have earned plaudits for their attacking, swashbuckling style this term, so quite why Brendan Rodgers switched to a ‘park the bus’ style against the champions is anybody’s guess.

It worked to some extent – Jamie Vardy netting a classic counter-attacking goal, but trying to defend deep against City for 90 minutes rarely eds well, as evidenced by the home side’s complete superiority. They arguably could and should have scored more.

We expect Leicester to return to their attacking blueprint here, and why not: they had won eight on the bounce prior to engagements with Norwich and Man City. Their home record – W7 D2 L0 – speaks volumes.

The bookies make us a near even money favourite to win this game, and while it is unusual for us to say this you do wonder if those odds are too short.

Leicester are excellent on home soil, and we can only speculate as to what impact – if any – playing two games in the Doha heat, followed by the long journey home, will have had on our boys.

We’re not saying we won’t win, it’s just that backing the draw at a price of 13/5 is arguably better value.

Egged on by their vociferous home support, Leicester will not be parking the bus here – Rodgers will have learnt his lesson, and so we’re expecting the Foxes to come at us hard.