When we talk about quality football managers and coaching staff, what are the key attributes we tend to think of when analysing the best?

They need to have good management skills of course, and that innate ability to be able to motivate their players to deliver their best efforts – whether using the carrot or the stick methodology.

A good manager should be a strong tactician too, with a skill for knowing how to break down a stubborn opponent or match an opposition in a swell of confident form.

Attention to detail on the training field is another key attribute, and at a level of the beautiful game where margins are tight that can be the difference maker between success and otherwise.

Set piece goals have invariably aided Liverpool’s cause this season, and Virgil van Dijk’s brace of headers from corners against Brighton on Saturday took our Premier League tally to eight set piece goals this term – some 25% of our whole goal tally.

Of course, it helps that we have the right foot, nay, the wand of Trent Alexander-Arnold on delivery, but it is the attention of detail from Jurgen Klopp and his staff that makes such stats possible.

Set pieces are ‘easy’ goals, often just two or three connections with the ball, and it’s an edge which may just see us romp to the title.

But as we head into a crammed December fixture list on the back of that 2-1 victory over the Seagulls, we will see the mettle of this Liverpool squad tested with players likely to be missing at times or rested.

The first assignment of the month? Just the small matter of the Merseyside derby against Everton at Anfield on Wednesday.

Alisson’s red card against Brighton on Saturday, picked up for a rather creative handball outside of his penalty area, means that the Brazilian will have to sit this one out. Adrian, who deputised ably earlier in the season, will presumably return between the sticks.

Joel Matip’s nagging injury continues to keep him on the sidelines, while news of the seriousness of Fabinho’s injury has now been confirmed. The midfielder has damaged his ankle to the extent that he is unlikely to be seen in a red shirt again until January.

So there are some problems to be solved by the manager ahead of this one, and you suspect he might have made more changes given our hectic schedule in December – but a game against Everton does not lend itself to taking your foot off the gas.

As such, we expect a full throttle performance from a first-choice Liverpool starting eleven – or that which is available, anyway.

The traditional back four and the normal trio up front are expected/hoped for, while in midfield Klopp has a choice: does he opt for an experienced trio of Henderson/Milner/Wijnaldum in such an important game, or add some dynamism into the mix via Oxlade-Chamberlain or Keita? 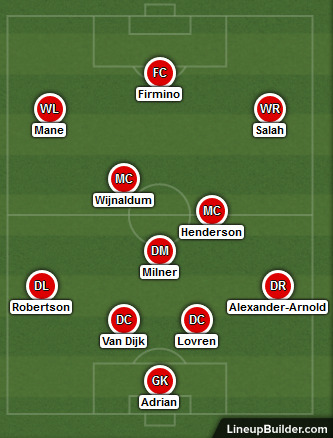 For now, at the time of writing at least, Marco Silva has clung on to his job at Everton despite their seventeenth place in the table and a run of form reading W2 D1 L7.

That said, the Toffees did show signs of improvement against Leicester on Sunday – albeit in defeat. Silva switched to a 5-4-1 formation, and it certainly made his side look more solid. They led for the best part of 45 minutes against the high-flying Foxes, too.

Everton’s winless run against us stretches back to October 2010, some 19 head-to-head meetings, with five defeats in their last eight Merseyside derbies. Does this Toffees side have the quality to rectify that drought?

There has been nothing about Everton’s recent form to suggest they can stop us on Wednesday – even accounting for our list of absentees.

They played well for an hour against Leicester, but their lack of belief and confidence was evident when the Foxes really started going at them.

So, we’re expecting a performance full of endeavour and hard work from them, but also the doubts and pessimism that all teams in their predicament experience.

Our odds of 2/5 with the bookies to win this game are perfectly fair, and serve up an ample opportunity: at this moment in time, is there two goals or more worth of difference between the two teams?

We would argue that there is, and so our simple selection for this encounter is Liverpool with a -1 goal handicap at a price of 21/20.