It gets no better than this. The absolute blueprint for a FA Cup third round tie against your bitter local rivals is to make nine changes to your starting eleven, in order to rest players, and still go out and get the win. And that’s exactly what Liverpool did in the 1-0 victory over Everton on Sunday.

Jurgen Klopp is a manager who has always had his eye on the bigger prize since joining the club, be it Premier League or Champions League glory, and so once again it was not a huge surprise to see him field a so-called weakened side against the Toffees.

But boy, did his young guns step up to the plate to show that the future of this football club is incredibly bright.

And, in the end, it was Jones who made all the headlines, curling home a fantastic winner after 71 minutes to end Everton’s resistance to what had been a sparkling performance from the Reds.

Indeed, the only sour note was a muscle injury suffered by James Milner, who limped off as early as the ninth minute. The prognosis is not good on that one.

However, Klopp was overwhelmingly positive in his post-match interview given what his young side had just achieved. “I saw a sensationally good performance of a not very experienced team with a lot of players playing for the first time on this kind of stage, in front of this crowd, against the opponent. It was outstanding,” he said.

“I loved it – I loved each second of this game.”

You can rest assured he will be restoring his big guns to the starting eleven for Saturday’s trip to the Tottenham Hotspur Stadium, mind you.

A welcome rest for much of our first team will ensure plenty of energy and vibrancy in the capital at the weekend.

All of the big names should return, with Joe Gomez once again partnering Virgil van Dijk in the heart of the defence if Dejan Lovren and Joel Matip fail to return to fitness in time.

“They are in a good way. Most of them will not be available for [FA Cup], but from today, we have eight days until the next game, so we will see what’s then possible,” Klopp said when quizzed on the duo.

Fabinho is still working his way back to fitness, while the diagnosis of Milner and Naby Keita is still uncertain – both are expected to be out for a few weeks. Xherdan Shaqiri could come back into contention following his thigh injury, but it is unlikely he will start here anyway.

The manager might be tempted to field Curtis Jones alongside Jordan Henderson and Gini Wijnaldum in midfield – instead, Adam Lallana will probably get the nod ahead of Alex Oxlade-Chamberlain, while our terrific trio in attack will be restored to give nightmares to Tottenham’s leaky defence. 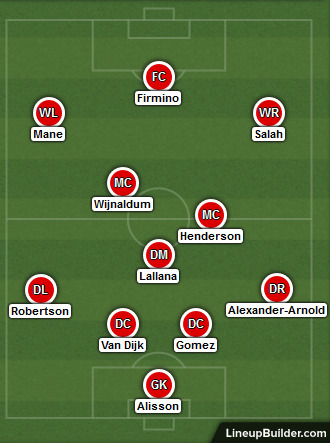 It would be fair to say that the honeymoon period for Jose Mourinho is well and truly over.

A bright start has given way to inconsistent form and problems at both ends of the pitch, and the Special One has reverted to type as a perennial moaner whose woes are almost always somebody else’s fault.

The 1-1 draw with Middlesbrough in the FA Cup was the tip of the iceberg, with a pair of defeats in the Premier League of late to Chelsea and Southampton matched by a below-par draw with Norwich.

There are major problems at Spurs with hark Kane injured and a defence seemingly incapable of keeping a lean sheet, and they will very much be there for the taking on Saturday.

December 7: that was the last time Tottenham kept a Premier League clean sheet. The last time before that? September 14.

If you are conceding goals, you need to be able to find a way to score them, and its rather timely news – for us at least – that Harry Kane, who possesses an excellent scoring record against Liverpool, will be missing the game.

It’s not the end of the world for Spurs, because Son Heung-min often looks his best when playing through the middle, but clearly our chances are boosted exponentially by the striker’s absence.

So, backing Liverpool to win this match at odds of 8/11 is a no-brainer, really. The Tottenham fans are just starting to get on their players’ backs, and that toxic atmosphere should lend itself to a comfortable away victory.