Three defeats in the space of a fortnight is absolutely far from ideal. But anybody predicting the downfall of Liverpool FC based upon this spell of 14 days does so rather prematurely – there really is no reason for Reds fans to panic.

The 0-1 defeat to Atletico Madrid was unfortunate, with our hosts playing out of their skin, but then realistically we only need to go one-nil up at Anfield in the return leg and the whole tie is back to square one.

We weren’t very good against Watford, admittedly, and the Hornets thoroughly deserved their victory. But to go 27 games unbeaten in one of the most challenging and competitive leagues in the world should be the focus, rather than one bad at the office.

As for the 0-2 loss at Chelsea in the FA Cup on Tuesday, that was one of those frustrating occasions where making seven changes to your starting line-up really does make a difference.

There was still plenty of class on the pitch, of course, but if you take Mo Salah, Bobby Firmino, Jordan Henderson and Alisson out of any team in world football and they would subsequently struggle.

Their replacements acquitted themselves well, by and large, and we certainly dominated for large periods of the game. But a lack of quality in the final third – and Adrian’s disastrous fumble for Chelsea’s opener – in the end proved too much to overcome.

“We are disappointed, as much as you can be,” Klopp said afterwards. “We tried everything; I think everyone saw that at least, the effort was sensational. It was all good, everybody tried everything.

“But we have now four days until we play Bournemouth at 12.30 so we have to be ready, and we will be ready.”

The secret to an immediate return to former glories is to get back in the saddle, and that’s exactly what our strongest set of players can do when we welcome the Cherries to Anfield on Saturday lunchtime.

Changes were made to the starting eleven at Stamford Bridge, but there will be no resting on laurels in a match in which Klopp will be expecting his troops to get back to winning ways.

Jordan Henderson remains sidelined until later in March with his muscle injury, although the good news is that Naby Keita could be fit for a return on Saturday. “A little, little, little bit but enough with his hip, that’s the only info I got from the medical dept. [He] is not ready [for the FA Cup, but] could be ready [for Bournemouth]. It’s not serious but obviously serious enough.”

We’re anticipating a return in goal for Alisson and for the first choice back four – Alexander-Arnold, Gomez, Van Dijk, Robertson – to be restored.

The balance in midfield is a bit trickier. Fabinho will presumably anchor the trio, and it’s likely that Alex Oxlade-Chamberlain will appear at the head of the triumvirate. Gini Wijnaldum will surely get the nod over James Milner and the ailing Keita as the third.

In attack, Salah, Firmino and Sadio Mane will be unleashed with the message to enjoy themselves in (hopefully) tearing Bournemouth apart. 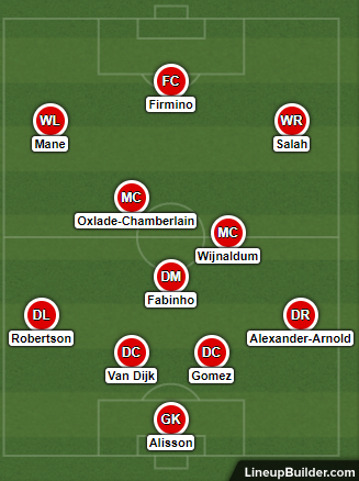 It would be fair to surmise that the past few months have not gone as planned for Bournemouth.

A Premier League formline of W2 D2 L6 hides no secrets, not does the fact that if you extend that back to November the Cherries’ paltry efforts read W3 D2 L12.

Without wishing to sound like we’re picking on the south coast outfit, their run of form on the road reads W1 D0 L8.

Are there any positive signs then for Eddie Howe? Not particularly, although his troops did put in a spirited display last time out in a 2-2 draw with Chelsea.

When you look at Bournemouth’s ledger of current form, it would take a masochist to back them to get a result at Anfield.

Yes, we’ve lost three of our last four, but this is a step down in class for what will be our strongest available starting eleven.

Making it count from a betting perspective is another matter, with Liverpool as short as 2/9 to triumph and odds-on (8/11) to win with a -1 goal handicap.

So let’s throw our hats on the ground and bet positively: let’s try Liverpool/Liverpool in the Half Time/Full Time market at an appetising 5/6.