It’s hard to feel any positivity from the 2-2 draw with Everton last time out. There were dropped points against a bitter rival, of course, which is less than ideal, but the fact that Virgil van Dijk picked up an excruciating knee injury that will keep him out for six months – and possibly the rest of the season – while Jordan Pickford, the assailant, got away scot-free.

Things started brightly enough at Goodison Park when Sadio Mane put Liverpool ahead, but soon after the controversy surrounding Van Dijk ensued. Now, VAR confirmed that the Dutchman was offside and so the Reds wouldn’t have been given a penalty anyway, but the rules of the game dictate that Pickford could – and maybe should – have been sent off.

One-nil down and with their keeper sent off….Everton’s mission would have been wholly different.

But Pickford survived and the Toffees kicked on, bagging an equaliser when Michael Keane nodded home a corner from James Rodriguez.

A nip-and-tuck contest ensued and in truth either side could have won it, and it looked like Liverpool might do exactly that when Mo Salah fired home after 72 minutes to regain the lead.

But without the calming presence of Van Dijk at the back, the Reds looked vulnerable and so it proved when the in-form Dominic Calvert-Lewin headed home with nine minutes to play.

That was essentially that, despite Richarlison’s late dismissal, and Liverpool have every right to feel aggrieved at how the action panned out.

There’s a slight change of scene in midweek as the Champions League gets underway, with our first assignment being a trip to Amsterdam to take on Ajax on Wednesday.

As you are probably now very much aware, Virgil van Dijk will need surgery on his injured knee, and the reality is that Liverpool won’t see him again in a red shirt until the spring at the earliest.

“A few things are clear, so he now will be out for a while, that’s clear. We don’t want to set any timeframe, to be honest, because each player is different,” Jurgen Klopp told Liverpool.com when quizzed on a possible duration for his defender’s absence.

“But he will be out for a pretty long time, and that’s what the situation is.”

It means something of a rethink at the back for the foreseeable future, and while Joel Matip and Joe Gomez are more than capable both are prone to injury. Fabinho, a potential deputy, would weaken midfield if he was pressed into action in defence.

Incidentally, Matip was filmed heading into a Liverpool’s Spire Hospital after the Everton game, and after having a scan we await to hear the results. Presumably, he has suffered some kind of ailment that will prevent him taking part in the Ajax game.

So, you would expect Klopp to pair Gomez and Fabinho in defence, rather than drafting in a youngster like Sepp van den Berg or Rhys Williams.

The manager said ‘we don’t know yet’ when quizzed as to whether Thiago’s knock against the Toffees would keep him out on Wednesday, but the good news is that Naby Keita has returned to training after a period of isolation following his positive COVID-19 test. 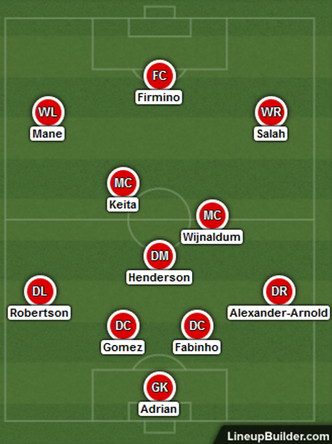 Ajax have got off to a decent enough start this season in Eredivisie – W4 D1 L0 – but it’s against elite opposition in Europe that will be a true measure of their quality.

Remember, they lost Hakim Ziyech and Donny van de Beek in the summer to go with the sale of the likes of Matthijs de Ligt and Frenkie de Jong prior to that, so once again the Dutch side find themselves in transition.

It’s a situation that a hurting Liverpool will be looking to take full advantage of….

When we scoured the Ajax vs Liverpool odds we were surprised to see the Reds as long as 3/4 with some bookies.

Yes, the loss of Van Dijk, Alisson and Matip is hurtful, but from an attacking perspective Liverpool are unharmed and firing on all cylinders.

And when you look at Ajax, this is a side who have lost so many attacking talents in recent times, and their main outlets – Dusan Tadic, Klaas Jan Huntelaar, Quincey Promes – are not what we would call elite level.

And so no further exploration is required: Liverpool to win at 3/4 is absolutely fair game.