By the time Liverpool run out onto the pitch at Anfield on Saturday, it will have been a full 18 days since they last engaged in competitive football. Is that a good thing? Only time will tell, although you suspect Jurgen Klopp will have been happy to hand a rest to some of his injury-ravaged stars.

Of course, some of his key figures have been jetting off to all corners of the globe for international duty, with the likes of Alisson, Bobby Firmino and Fabinho in Brazil, Darwin Nunez in Canada and Luis Diaz in Mexico as of Wednesday, and so the hope is that they return to Merseyside unscathed and free of jetlag.

Plenty can change in football in 18 days of course, and Brighton – the visitors to Anfield on Saturday – will be tackling the contest without inspirational manager Graham Potter. That will surely play into the Reds’ hands.

Although Liverpool’s date with Chelsea was postponed a couple of weekends ago, the likes of Manchester City, Arsenal and Tottenham were all in action and all picked up wins – it means that Klopp’s men are some nine points adrift of the table-toppers….albeit with a game in hand.

That said, the Reds really can’t afford to give too many more points away, and so that confirms why Saturday’s clash with the Seagulls is so important.

There’s some assumptions to be made here, in that we’re expecting all of Liverpool’s international jet-setters to return to Merseyside in match fit condition.

Let’s start with those who are definitely out. Curtis Jones, Naby Keita and Alex Oxlade-Chamberlain are not expected to return until October, while summer recruit Calvin Ramsay is also yet to return to full training.

There’s some doubts too about Andy Robertson, who has been struggling with a niggling knee injury. But Ibrahima Konate is back in full training – he may start against Rangers in the Champions League, while we’d expect Jordan Henderson to return here.

The attack may be determined by who returns from international duty in the best order, but we wouldn’t be surprised to see Diogo Jota get the nod alongside Salah and possibly Diaz. 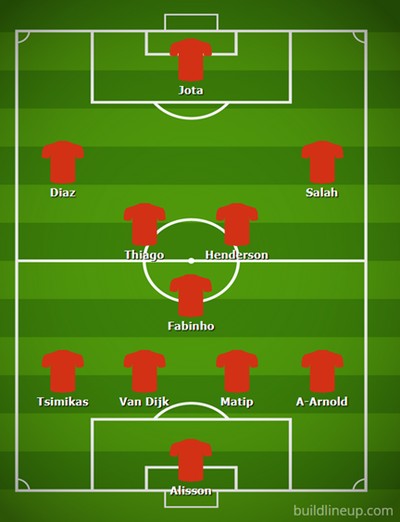 Brighton’s positive start to the season has come as something of a double-edged sword.

An opening gambit of W4 D1 L1 has seen the Seagulls soar into the top four of the Premier League, with wins over Manchester United and West Ham – plus a five-goal shellacking of Leicester – particularly impressive.

But it has come at a price. Brighton have been so good that their manager has been tempted away by Chelsea, and now the Seagulls need to bed in under the tutelage of new head coach Roberto De Zerbi.

This is his first taste of English football, although he was praised for his enterprising style as head coach of Sassuolo and Shakhtar Donetsk.

This is a new beginning for Brighton, and a fresh start for Liverpool now that several key figures have returned from injury.

Based on the evidence of what we have seen so far this term, the reality is that there is little value in the 2/5 about a Liverpool victory, however if they return to something like their best – and the Seagulls regress even a tad under their new manager – then evidently a home win is the most likely result.

Brighton’s six games so far this term have yielded 16 goals – including eleven notched by the Seagulls, and Liverpool, as we know, our no strangers to goal-laden contests.

De Zerbi was praised for his attacking style at Sassuolo, so maybe goals is the smart angle to follow in at Anfield – both teams to score has legs at odds of 10/11 in itself, while BTTS and Over 2.5 Goals seems a fair call as well at 6/5.