Job done: that’s the best way to describe Liverpool’s 1-0 win over Plymouth Argyle in the FA Cup third round replay. It wasn’t pretty, but Lucas’ goal – his first in seven years (it feels like longer) – was enough to separate the sides and secure a fourth round date with Wolves.

The performance was so-so, but once again underpinned the importance of Philippe Coutinho to this Reds’ side. The little Brazilian was majestic at times with his trickery and ball retention, and it was his corner form which Lucas headed home. It’s great to have him back, and he will surely help to boost our title challenge in the coming weeks and months.

The negatives from the game were few and far between, although Divock Origi’s woeful penalty attempt, which was comfortably saved, is a worry. The Belgian hasn’t scored since December 14, and he looks woefully short of confidence at present. It was also a night to forget for Daniel Sturridge, who appears to be out of sorts, and Alberto Moreno, who once again looked out of his depth and this time against (no offence) League Two opposition. The need for a back-up left back to be brought in during the January transfer window is clear for all to see.

But let’s remain positive because, ultimately, a win is a win. Trent Alexander-Arnold earned the Man of the Match trophy and the young defender looks to be an absolute gem of a player, while Ben Woodburn and Oviemuno Ejaria confirm that the Academy is fulfilling its role of producing quality young stars of the future.

Onwards we go to Saturday and the visit of Swansea to Anfield. The Welsh side looked slightly better under new boss Paul Clement for the first half hour of their encounter with Arsenal, but the Gunners quality eventually shone through in a 4-0 romp. We can’t afford any complacency, but this should be a resounding victory for the Reds.

The good news from the Plymouth clash is that Coutinho and Sturridge both seemingly made it through the match unscathed, with the Brazilian substituted off in the 65th minute to ease him back into first team action. He looks ready to start on Saturday.

Sturridge will surely continue on the right-hand side in place of Sadio Mane, who is still away with Senegal at the African Cup of Nations, while the midfield trio of Adam Lallana, Gigi Wijnaldum and Jordan Henderson will resume their outstanding partnership.

At the back, it would appear that the ongoing dispute over the availability of Joel Matip means that that the Cameroon ace will once again be sidelined, although it is likely that Nathaniel Clyne will return after recovering from the rib injury that caused him to miss the Manchester United game on Sunday. 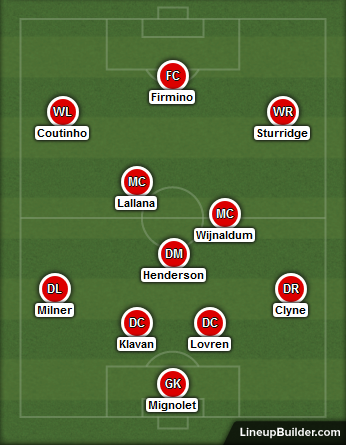 Sitting bottom of the table with 14 defeats in 21 starts, Swansea really needed a firm hand to take over the running of the side once Bob Bradley’s services were dispensed with. Lurching from disaster to potential catastrophe, Paul Clement – who won less than half his games as manager at cash-rich Derby County – is the new man in the hot seat.

The Swans started well enough against Arsenal last time out but eventually succumbed to a 0-4 loss, and that means that in those 21 appearances they have conceded two or more goals in 15 (3+ in 11!). Clearly, this is an area which the Reds can exploit.

Swansea have lost six of their last seven and have been poor on the road this term (W2 D1 L7 GF9 GA22), so there really is no excuse for anything other than a Liverpool victory here.

Our selections for this match have to be goal-based and have to be in Liverpool’s favour – there is simply no other course of action given the evidence.

Unfortunately the bookmakers aren’t daft and have recognised what should be a comfortable victory for the home side, with even a -1 Handicap in their favour an unbackable 8/13. So our first wager, Liverpool Win & Over 3.5 Goals at 7/5, gives a nod to the fact that the Reds could run riot, or that Swansea – with some excellent attacking players in Llorente, Sigurdsson, Barrow etc – could get on the scoresheet. It’s a gamble but one not completely without sense.

This has the feel of one of those matches where bets are flutters, rather than investments, and our next shot in the dark comes in the Anytime Goalscorer market. Coutinho has a habit of netting in home romps and at 11/8 the diminutive Brazilian, seemingly back to his best, is worth adding to the betslip.

A correct score flutter is fraught with risk here with so many scorelines possible, but let’s try 3-1 to Liverpool at 10/1.

Post Tags:
Homepage » Match Previews » Liverpool vs Swansea Betting Tips (21/01/17) – Expect the Reds to Get Back to Winning Ways Against the Swans