This FA Cup Third Round replay feels like something of a punishment for Jurgen Klopp and his gall in fielding a very youthful side in the first fixture between the two sides.

That’s a little harsh on the Liverpool gaffer – his young side dominated the game but simply couldn’t find a way past some valiant Plymouth defending, but we don’t expect the German to take the Pilgrims as lightly this time around.

In Klopp’s defence he had a bit of a fixture pile-up to negotiate at the time of the first tie between these two, with an EFL Cup semi-final against Southampton – and the small matter of a trip to Old Trafford on Sunday – rather big distractions, but with a lunchtime date with Swansea at Anfield on Saturday to come, the pressure is eased somewhat this time around; no offence to the Swans.

Speaking of that trip to Old Trafford, it was refreshing to see how well we coped by and large with the long-ball tactics of Manchester United, and it was unfortunate that Sadio Mane is away on international duty; his pace and impetus could have helped us find that second goal after James Milner’s opener and killed the game off.

As it was, we couldn’t find a second goal and United’s route one game finally paid dividends. But if you asked a selection of Liverpool supporters before the game if they would be happy with a point, most would have said yes given United’s most recent form.

So, no harm done, and as such we expect a strong Liverpool side to make the trip to the south coast for this clash with Plymouth.

This is the million dollar question, and while we may get a few selections wrong in our graphic below we are expecting a mix of youth and experience to take to the field on Wednesday evening.

One player who won’t be selected is Joel Matip, who finds himself at a bizarre tug of war between the club and FIFA. With the African Nations Cup ongoing, you may recall Matip withdrawing from the Cameroon squad through injury. Now fully fit, the powerful centre half would ideally return to the starting eleven, but with the Reds facing possible sanctions from the game’s governing body it remains to be seen whether that is how matters play out. One thing is for sure, it is unlikely that he will take to the field.

We do believe that Philippe Coutinho will play some part, however, and probably from the start: the Brazilian is in dire need of match practise. His fellow countryman Lucas will line up in the heart of the defence one more, with possible starts for Daniel Sturridge and Divock Origi too as Klopp aims to avoid any further FA Cup headaches. 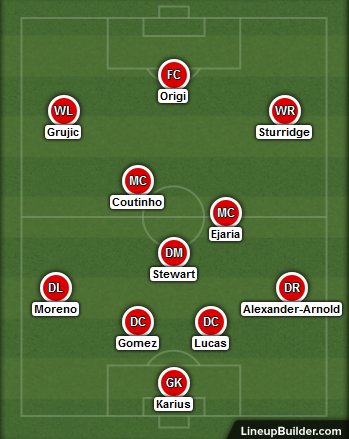 As we saw in the first fixture, Plymouth are a more than capable side and that is reflected by their position in League Two, where they are sitting pretty in second place.

They are excellent at Home Park too with a return of W8 D3 L3 thus far, and a handy little run of four wins in six has given them added confidence.

They have shown some vulnerability in defence however, having conceded two or more goals in matches against Grimsby, Barnet, Morecambe, Wycombe and Stevenage; all of which have come in their last ten outings too. Clearly, this will be an avenue for the Reds to exploit.

To the naked eye the 0-0 stalemate in the first tie between these two might have seemed a tight and closely-fought affair, but the reality is that with 77% possession and 28 shots on goal, it was, metaphorically speaking, ‘one of those days’ for the Reds.

We don’t expect Plymouth to be any more adventurous than they were in the first game, and yet we anticipate that Liverpool will play better. Accordingly, a comfortable win for the visitors is expected.

The bookmakers have tried to put us off by making Liverpool a 3/10 favourite, but we’re happy to go in with the -1 handicap at 5/6 given that the Pilgrims have conceded two or more in a game against some rather less celebrated opposition than the Merseysiders.

We would ordinarily avoid the Anytime Goalscorer market in a game where the starting line-ups are hard to predict, but all of the noise coming out of the Liverpool camp is that Philippe Coutinho will start this match. At a price of 6/5, we’re happy to get him on side.

Extracting betting value from a contest like this is difficult, so here’s a complete shot in the dark that, at first glance, looks viable: at half time, Liverpool to Lead & Both Teams to Score (No) is an excellent price at 10/11.