Well, that made us look rather silly. We had predicted a low scoring draw at the London Stadium last week when Liverpool visited West Ham, and the ensuing hammering took us and probably many other people by surprise.

That’s not to say we were disappointed in any way, of course. The little combinations between Coutinho and Divock Origi and Adam Lallana and Sturridge were a joy to behold, and makes you wonder what might have been had the little Brazilian magician been pulling the strings from the centre of the pitch all season.

We shall never know of course, but at least Coutinho has one more opportunity to wield his magic wand this season against Middlesbrough on Sunday. He won’t be afforded as much time and space against the Boro, who will look to close down the space between their lines and play with all eleven men behind the ball at times. But with a number of attacking lieutenants also coming up to the boil, this is a mouth-watering time to be a Liverpool supporter.

It’s just a shame that the season has to come to an end!

As far as the Premier League shake-up goes the equation is quite simple: if Liverpool beat Middlesbrough here then they will finish fourth and secure that final Champions League place. If Arsenal fail to beat Everton then we will only need a point to get the job done, but given the ferocity with which the Reds attacked against West Ham the smart strategy has to be to attack with similar freedom of expression.

If it comes off, we may be looking at a handsome victory to sign off with at Anfield.

Even if Jurgen Klopp had a wealth of options to call upon you suspect that he wouldn’t change the starting eleven that was so devastating against West Ham.

That statement would include Jordan Henderson, who is highly unlikely to even make the squad against Middlesbrough. The England man will be left to recuperate before an intense pre-season campaign ensures he is in shape for the start of the 2017/18 season.

And that would also preclude Roberto Firmino from selection too. The Brazilian is said to be a doubt anyway, so perhaps that will make Klopp’s decision a lot easier.

The gaffer is likely to stick with the 4-4-2 diamond formation that he trialled with such great results against the Hammers, with Emre Can sitting in front of the back four, Gigi Wijnaldum and Adam Lallana acting as box-to-box midfielders and Phil Coutinho pulling the strings behind a front two of Divock Origi and Daniel Sturridge….presuming the latter is fit, of course! 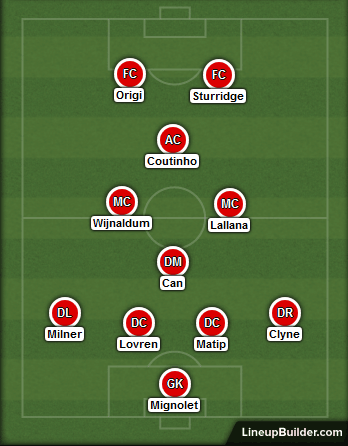 There weren’t many pundits that gave the Boro much of a prayer of avoiding relegation at the start of the season, and after all that has transpired the naysayers have been proven correct.

The North East outfit have won just five of their 37 Premier League outings this term, which is never going to be enough to secure survival, and in the past few weeks when nothing less than three points would do the players have found themselves hamstrung and unable to shake off the conservatism stressed upon them by sacked former manager Aitor Karanka.

So there’s no way of shaping it: Boro’s form is really poor. They beat Sunderland a few weeks ago but that is their only league triumph of 2017 to date. There have been smatterings of draws, but really Middlesbrough have been set up all season to avoid defeat, rather than win games, and that has been a huge handicap to them of late now that Steve Agnew is trying to coax his players out of their shells.

It’s impossible to see past anything other than a Liverpool win here; as the bookmakers are aware. They have priced the Reds as short as 1/7 to win this game, and clearly we are going to have to look elsewhere for our betting value.

There isn’t really much to be found. We like Liverpool to Win & Both Teams to Score (No) as we expect the Reds to dominate possession to such an extent that Middlesbrough won’t get a look in. But at odds of 8/13, it’s up to you whether you pursue that angle.

Instead, let’s try to end the season on a high with a pair of correct score wagers. Boro will look to make life difficult for us by getting lots of bodies behind the ball, and that could limit the scoring opportunities available to the players….the visitors certainly won’t be as open as West Ham were last time out anyway.