If there is such a thing as an end of season malaise, then the Liverpool players must snap out of it rather quickly. After a derisory performance in the 0-0 stalemate with Southampton last time out, the Reds need to find a spark or risk the rest of the campaign turning into something of a washout.

That draw has opened up the very real possibility that Manchester City could leapfrog us into third place by the end of the campaign. The difference there is that Liverpool would have to play a qualifier to get into the Champions League, rather than spiriting straight through to the group phase.

To ward off that possibility, we must win our final games….and judging by the abject display against the Saints, that could be some ask.

The stats may say that Liverpool fired eight shots on target, but in truth they never looked like scoring. There was even something rather half-hearted about James Milner’s penalty – earned when Jack Stephens was adjudged to have handled in the area – and it was no surprise to see Fraser Forster palm it away.

The players cannot blame fatigue – this has been one of their easiest seasons in recent memory in terms of matches played, so perhaps the absence of Adam Lallana, Sadio Mane and Jordan Henderson has hit harder than first feared. Maybe this lack of strength in depth is something that Jurgen Klopp needs to address in the summer.

Attention turns to Sunday and the trip to West Ham, who put in a fantastic shift to see off their London rivals Spurs last time out. They flew into tackles – hard but fair – and played with a real zest; exactly what you’d expect from a side who have been told their manager, Slaven Bilic, who has a decent rapport with his players, that he will be sacked unless the Hammers end the campaign well.

They showed enough vigour against Sur to suggest that if Liverpool play as badly as they did against the Saints, they may well taste back-to-back defeats.

There is no chance of Sadio Mane pulling on a red shirt again this season, while the diagnosis of Jordan Henderson’s foot injury continues to confound medical experts and Jurgen Klopp alike.

“You wish a ligament had snapped. Then at least you know if you can fix it or if you have to wait for six, eight weeks or whatever,” he told The Guardian. “We have not made a final judgement for this season. We don’t know if he will back tomorrow in training or next week but because it is Jordan and he has a really high fitness level, even if it just swimming, we know we can think about him immediately when he is ready”.

So, the likelihood is that Henderson won’t make a reappearance this term – certainly not this week anyway.

Adam Lallana was deemed only fit enough to play half an hour so against Southampton, but you suspect he will be pressed into starting action this week; such was Liverpool’s predictability and lack of guile last time out. 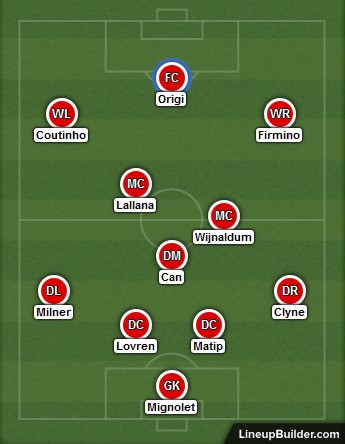 On such small margins do fickle footballers revolve, but the speculation regarding Slaven Bilic’s future – which has intensified in the past month or so – has driven the West Ham players on to much better performances.

They are now unbeaten in five, with a pair of home victories backed by a run of four clean sheets in those five starts. Are Bilic’s players fighting for him? You better believe it.

The fixture list has been kind to them – if we ignore the Spurs game, their other four most recent fixtures were Swansea (h), Sunderland (a), Everton (h) and Stoke (a). So take the upturn with a pinch of salt, but make no mistake that these Hammers should not be overlooked.

We’re ashamed to say it (as always when betting against our beloved) but our main bet here is in West Ham’s favour: a +0.75 Asian handicap to be precise, which would have yielded a return in 12 of their last 13 matches. Given the Reds’ dismal showing last time out, that seems fair enough at a shade over even money.

A feature of the Hammers’ games is their low scoring nature, particularly at home. Their last three outings at the Olympic Stadium have witnessed just two goals in total – including three West Ham clean sheets. Under 2.5 Goals looks excellent value at 21/20 then.

And for our final selection we’re going to take a small stakes stab at the draw (3/1). This is a fixture that looks tough to set the teams apart.