Make no mistake, last week’s 1-0 win over Watford was a huge result for everyone associated with Liverpool FC. Forget the manner of the victory and the performance, and instead savour the three points which take the Reds ever closer to that essential top four finish.

Watford are an awkward side, and many have gone to Vicarage Road this term and returned with nothing but a sense of what might have been. It’s the kind of fixture which this Liverpool side has a habit of stuffing up.

True, it needed an absolute worldie from Emre Can to secure the points – and what a goal that was from the Turkish international, and we were thankful that the Hornets’ Sebastian Prodl could only hit the bar in injury time, but this was better from Liverpool and suggested that the next time a banana skin comes along, the players will be able to step majestically over it.

There was another silver lining in the return of Adam Lallana from injury too; he was only on the pitch a matter of minutes before rattling the Watford crossbar, and he looked back to full sharpness almost immediately.

The win takes us onto 69 points – three clear of Manchester and four ahead of United with both of those sides holding a game in hand. But the Red Devils have to travel to Arsenal this week with a stack of injuries, so it is not inconceivable that they will drop points. So a win for us over Southampton would be huge in the context of the top four race.

The Saints are sort of clattering towards the end of the season with one point taken from a possible nine, so surely this is the perfect opportunity for us to put one foot in next season’s Champions League.

There was a tangible feeling of relief as Adam Lallana made his way onto the Vicarage Road turf last week; the England international is a key component of this Liverpool side in linking midfield with the front three; something we’ve been hopelessly lacking in of late. He should play a key role in our remaining trio of outings.

The downside of that was that Lallana came on for Philippe Coutinho, who had to go off with a dead leg. The Brazilian has missed training this week but is expected to return in time for the Southampton clash, according to the Liverpool Echo.

We won’t see Danny Ings or Sadio Mane in a red shirt again this season unfortunately, and there is concern that Jordan Henderson’s condition has not improved of late. If this set of players can claim the three points on Sunday, it is likely that the club captain will be given the rest of the campaign off. 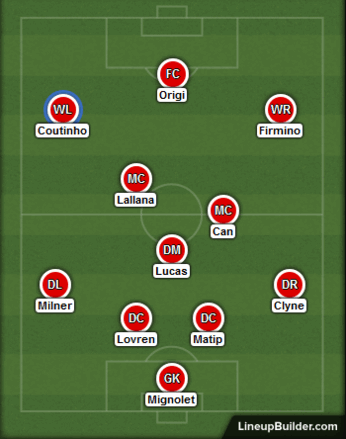 You get the impression that, psychologically at least, Southampton’s season ended with their EFL Cup final defeat to United.

Since then they have royally gone through the motions, getting tonked by Manchester City (0-3) and Chelsea (2-4) before failing to find a way past Hull City (0-0).

You sense that they will be up for this one though in what has become a new rivalry in the past few years; the Saints with some kind of vendetta after a number of their players headed north for Anfield. It adds an extra layer of bite to what otherwise might have been a procession for the Reds.

Recent defeats at White Hart Lane and Stamford Bridge for Southampton suggest that Liverpool really ought to be taking all three points here.

Southampton are one of those frustrating teams to bet on who have a habit of causing betting coupons up and down the land to be ripped into a million pieces. Some 13 of their last 17 games have witnessed three or more goals, and yet within that run there has also been two 0-0 draws and a pair of 1-0 scorelines.

So it’s hard to get an accurate read on the Saints, although interestingly their low-scoring encounters have come against West Brom, Burnley, Bournemouth and Hull which, to some extent, could all be anticipated. Conversely, goals have flowed in games against Tottenham (1-4 and 1-2), Chelsea (2-4), Manchester City (0-3) and in-form Crystal Palace (3-1), so for this game we are tempted to suggest that there will be plenty of goalmouth action.

It is noticeable that the Saints struggle against sides from the Premier League’s top six – W0 D2 L7 is their formline – and so we have to assume that Liverpool will claim the victory.

Such clarity enables us to place correct score bets with some confidence, and even though these are perilously hard to land a 2-1 result in Liverpool’s favour is surely worth investment at 8/1.