Well, that was disappointing. With all of the excitement, anticipation and suspense of the new football season, you can’t forgive Liverpool fans for feeling a little deflated after the 3-3 draw at Watford.

Don’t get us wrong: it was a cracking game to watch, but only if you were a neutral. The Reds spurned a 3-2 lead to go down to a late equaliser from the Hornets, and while the standard of our attacking play was enough to leave most pundits drooling, our defending – from set pieces yet again – left a lot to be desired.

After a see-saw opening it was Watford who drew first blood through Stefano Okaka, before Sadio Mane once again showed his class with a deft finish to bring the Reds level.
Unfortunately, our at times comical defending once again reared its head as Abdoulaye Doucoura tapped home just three minutes later as we failed to clear a routine cross.

A brilliant two minute spell early in the second period saw Roberto Firmino put us ahead from the spot after Mohamed Salah, so impressive on debut, was brought down in the box, before the Egyptian dusted himself down to tap home Firmino’s pass-cum-shot two minutes later.

That’s that then, you might have thought. The Reds will close this game out and take home a well-earned three points.

Unfortunately, nothing is particularly easy for this Liverpool defence, especially from set pieces. We failed to deal with a Jose Holebas corner once again, and this time Miguel Britos – despite protestations of offside – nodded home to nick a point in the 93rd minute.

That fallibility at defending set plays has become a huge Achilles heel for Liverpool, and with just two days to work on the training ground ahead of Tuesday’s crucial Champions League final qualifier first leg against Hoffenheim, there appears to be no respite for the Reds’ beleaguered backline.

As reported by the Liverpool Echo, no side scored more goals from set pieces in the Bundesliga last season than Hoffenheim; indeed, some 25% of their goals came from corners and free kicks.

Factor in that they were unbeaten at home in 17 starts on home soil last term, and we can safely say the Germans must not be treated lightly to say the very least.

Despite the obvious frailties shown at Vicarage Road, we expect Jurgen Klopp to name an unchanged side on Tuesday.

Nathaniel Clyne and Adam Lallana are both out for the foreseeable future, while Daniel Sturridge will probably injure himself opening the curtains at home or something and will miss out.

The speculation about Philippe Coutinho’s future at the club grows, and while his back injury is said to be genuine it is unlikely he will pull on a red shirt until his immediate future is resolved. The fact that a glum-faced Club Shop worker was seen prising a Coutinho poster down from the shopfront window on Sunday perhaps speaks volumes.

James Milner could only watch on as Alberto Moreno took his place at left back on Saturday, and while we were hoping for a high profile replacement for the England man at full back it appears that Klopp has fallen in love with the Spaniard, for the time being. Klopp even called Milner his ‘new midfielder’ last week, so perhaps that is a hint as to where his future lies. 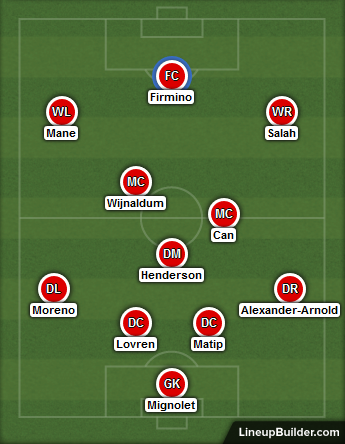 Perhaps the one saving grace for Liverpool is that Hoffenheim are yet to play a competitive game this term.

Okay, so they did open their account with a 1-0 win over Rot Weiss Erfurt, a German third tier outfit, in the DFB Pokal (the German League Cup) on Saturday, but that can hardly be described as a testing workout.

Prior to that they had won three friendlies – Standard Liege (4-2), Derby County (2-1) and Bologna (3-0), so their good form of last season has continued.

We’ve spoken already about Liverpool’s set piece nightmare, and in 6ft 4in striker Sandro Wagner Hoffenheim have the perfect tool to take advantage. He notched eleven times last season, and is 9/4 to find the net at any time against the Reds.

There is a certain fragility in wide areas for Liverpool, with Trent Alexander-Arnold highly capable but inexperienced at this level, and Moreno, despite a decent pre-season, still failing to convince. Hoffenheim’s right winger, former Arsenal man Serge Gnabry, is capable of giving the Spaniard a torrid evening.

At the other end of the pitch, the Germans kept 12 clean sheets last season and nine of those came on home soil. They shut out Bayern Munich but shipped three against Borussia M’gladbach and two each against Dortmund and RB Leipzig, so clearly there are opportunities there for the Reds.

So, add Over 2.5 Goals & BTTS to your portfolio at around the even money mark.