In a week that started in unconvincing fashion courtesy of the worrying 3-3 draw with Watford, business rather picked up for Liverpool in midweek with an excellent midweek victory over Hoffenheim.

It was the Germans’ first defeat on home soil in over a year, and that reflects just how well Jurgen Klopp’s side played. And it could have been so much better, because Trent Alexander-Arnold – who is maturing with each game – put the Reds 1-0 up with a sublime free kick before James Milner doubled the advantage deep into the second half.

Liverpool had one foot in the Champions League proper at this stage, but quickly had to retract it when they allowed Mark Uth to latch onto a long ball and slide home for the hosts.

But, all things considered, it was a great result that ensures the Reds take a one-goal advantage back to Anfield for the second leg and, of course, two away goals if necessary.

Pleasing, both against Hoffenheim and Watford at the weekend, was how well Mo Salah played. His link-up play with Roberto Firmino and Sadio Mane has been outstanding, and hopefully shows that Phil Coutinho will not be too sorely missed when he depart Merseyside (which he looks all but certain to do).</p

So we have momentum to take into the first visit to Anfield of the campaign, with the visiting Crystal Palace making the trip north. Yes, we all know the stats about Christian Benteke and his fondness for scoring against us, so let’s hope Klopp and his coaches have been working hard on the training ground and counteracting lofted balls into the penalty area.

The gaffer has named the same starting eleven in both of the side’s matches this term, and assuming nobody picked up an injury in Germany you suspect he will make it a hat-trick on Saturday.

Klopp favoured Alberto Moreno over James Milner at left back again at Hoffenheim, and while the Englishman came on as a substitute and conjured the winner he did so from a midfield berth, replacing Jordan Henderson after an hour. The manager has spoken in glowing terms about Moreno’s transformation during pre-season, and so the Spaniard appears to have made the spot his own in the eyes of Klopp.

We assume Henderson was given the hook as a precaution and a nod to his growing fitness, rather than anything more sinister. The last thing we need is for the captain to endure another spell on the sidelines.

Emre Can has matured in2 2017 and is starting to look like the real deal, and while Adam Lallana is sorely missed in the middle of the park as a link between the midfield and attack, Gigi Wijnaldum very seldom lets anyone down.

The Mane-Salah-Firmino holy trinity will continue in earnest, and there may even be a spot on the bench for Daniel Sturridge, who Klopp said is ‘looking good’ for a return to the squad this week following injury. 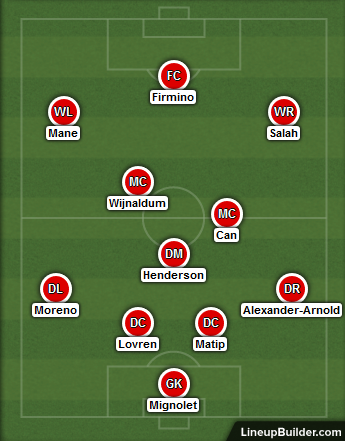 The Eagles didn’t exactly get their 2017/18 campaign off to the best of starts against promoted Huddersfield at Selhurst Park.

Frank de Boer’s first game in charge did not go to plan as the Terriers quickly romped into a 3-0 lead, and while Palace didn’t play as badly as the score suggests over 90 minutes clearly the Dutchman has a lot of work to do at the Londoners.

Their cause has not been aided by injuries – the latest of which was picked up Wilf Zaha on Saturday. The pacey winger let Selhurst Park in a knee brace, and while the damage is better than first feared he is still set to be out for up to four weeks.

On the sidelines he will be joined by Yohan Cabaye and James McArthur, with Pape Souare, Bacary Sako and Conor Wickham also on the treatment table.

A brilliant Expected Goals return of 2.37 for Liverpool against Watford confirms what we already knew: they are in great shape going forward.

But defensively we have looked vulnerable, even in midweek when conceding one and watching on as Andrej Kramaric missed a penalty, so naturally both teams to score is the first bet on the coupon at 10/11.

Goals are following Liverpool around at both ends of the pitch, but we still fancy them to get the verdict on home soil against Palace. Without Zaha it might just be the case that Benteke is starved of the service he needs, so while the visitors may net they will need to keep the Reds out as well, which seems unlikely.

And finally, we’ve got to follow in the fine start to the campaign that Sadio Mane has made. A scorer on Saturday and Man of the Match on Tuesday, the Senegal frontman is 13/10 to score anytime at Anfield, and that appears to be sublime value.