Why do clubs wait until transfer deadline day before conducting major business? It’s hard to say with any clarity, and realistically there is no logical explanation for it.

The best analogy is the desperate Christmas Eve shopper, browsing the empty shelves rabidly for gifts for his loved ones. He might pick up a crumpled box of chocolates, some lingerie that’s the wrong size or maybe even some week-old flowers from the petrol station, but the truth is that nobody – giver nor recipient – will be satisfied with the outcome. If it’s the thought that counts, then it’s probably not the best idea to wait until the last available moment to have ‘the thought’.

So, how high up Jurgen Klopp’s shortlist of new players was Alex Oxlade-Chamberlain? And, if the German has had his heart stolen by the England international, why did he wait until August 31 to seal the deal?

Okay, so there may be other factors at play. Maybe the Gunners are waiting to land their own big money deal, perhaps for Riyad Mahrez or Thomas Lemar, prior to letting the Ox leave. This piece was written at around 13:00 GMT, and as yet little business has been completed by Arsenal or anybody for that matter.

But Klopp was decisive in landing his man. “I am really, really happy we have got Alex signed,” he told the official club website. “Since the last game I have been waiting and hoping we could make this transfer – and when I got the news he was ours it was fantastic.

“I remember the first time I saw him play live – it was at Dortmund in 2014 and he came on as a sub that day and made a big impact. He stood out immediately because of his pace and skills and his attitude in such a big game for a young player.”

The reaction from Arsenal fans has been mixed, and in fact some have been happy to see the back of a player desperate to play more football in the middle of the park. Accusations of Oxlade-Chamberlain being a ‘snake’ have surfaced, as they tend to do, when maters of money are involved, but the Ox actually turned down a pay rise at the Gunners to join the Reds.

So, presumably Klopp has promised him plenty of game time in midfield. But does the 24-year-old add anything new – and better – to what we already have?

Making a worthwhile statistical analysis of Oxlade-Chamberlain is difficult, and that’s because Arsene Wenger has played him in so many different positions that consistency has been almost impossible for the England man.

This season, he’s been the first choice left wing back for the Gunners – not a position you’d expect him to occupy, but that is Wenger’s way after all.

From an economic perspective, the deal is a good one for Liverpool. A fee of £35 million for a young Englishman who has played in big matches and made more than 100 starts in the Premier League is, to all intents and purposes, a bargain. And there are far worse players than the Ox earning more than his new £120,000 a week salary!

But the question is where does he fit into the side? Having options is important, particularly with Champions League football on the agenda, but he wouldn’t leave Arsenal’s first team to sit on Liverpool’s bench, would he?

Klopp won’t be dropping Jordan Henderson any time soon, while Emre Can has been absolutely inspired so far this term – as good as any midfielder in England, for that matter. So that leaves a potential question mark over Gigi Wijnaldum….and we’ve not even mentioned Adam Lallana as yet.

A change in formation is unlikely, so is it a case of Wijnaldum vs the Ox for the final midfield berth? And if it is, who wins out?

The Dutchman is one of those players that tends to go under the radar, but his output cannot be misunderstood. As the graphic below confirms, in 33 Premier League outings last term Wijnaldum contributed six goals, nine assists, 1.7 shots per game and 1.2 key passes per 90 minutes.

Factor in 1.3 tackles won – a ratio some defenders would be proud of – and we can label Wijnaldum as a fantastic all-round midfield player. 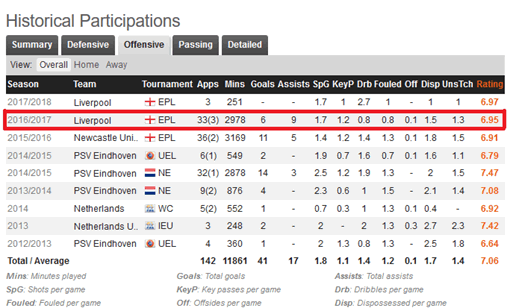 Compare and contrast that output to Oxlade-Chamberlain, a man who has scored 13 goals and offered 18 assists in a career dating back to 2010/11. Admittedly, he hasn’t always occupied his favoured central role, but there is very little in his statistical make-up that suggests Liverpool have signed the athletic midfield warrior they need. 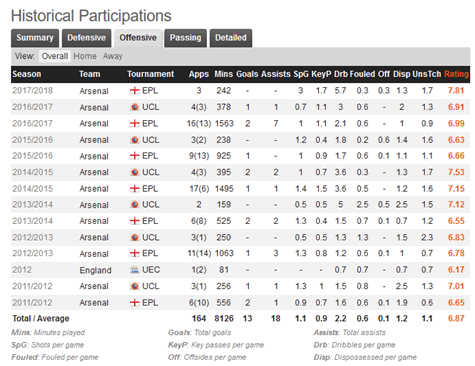 Before this sounds like a hatchet job, again let us reiterate that this is a good financial deal for a young English player who is versatile and has plenty of elite-level experience to his name.

But for our money he simply isn’t good enough to replace messrs Wijnaldum, Can and Henderson….so the Ox might have to patient as he dreams of midfield glory.

Post Tags:
Homepage » Analysis » Transfer Deadline Day: What Will The Ox Bring to the Reds?