Football is a funny old game, that’s well documented, and the scenarios that often play out when 22 men kick a bag of wind around can still shock and surprise a century or more after the beautiful game’s creation.

Another such occasion took place on Wednesday at Anfield as Liverpool, dominant and dangerous, somehow conspired to fail to beat Sevilla in the Champions League.

We say somehow – the Spaniards took the lead as early as the fifth minute – but from there it was all one-way traffic, with the Reds forging ahead with first-half goals from Roberto Firmino and Mo Salah.

But at the top level if you don’t take your chances you are likely to get punished, and that’s exactly what happened as the Reds – who had earlier missed a penalty through Firmino – conceded a 77th minute equaliser.

Never mind that Liverpool fired in 24 shots, seven of which were on target, and won ten corners, the only numbers that matter in football are those net to the teams’ names in the results section.

So football, yep, it’s a cruel game, but small margins often define matches at the highest level and Jurgen Klopp and his boys must now be aware of the discipline required in the Champions League.

Saturday presents a far different test. Burnley made a habit of upsetting the Premier League big guns last season, and they have continued where they left off last term by taking points from Chelsea and Spurs in their pair of away games to date.

The Clarets will be looking to make it a hat-trick of big scalps taken on the road this term, while Liverpool will be hoping to add three points to their tally without talisman Sadio Mane. Who will go home happy?

Liverpool are a different side without Sadio Mane, and clearly we are weaker as a consequence of his absence. His appeal against his three-match ban after being sent off against Manchester City has been rejected, and so now he will miss this fixture and the double-header against Leicester in the Premier League and the EFL Cup.

A replacement is needed but none immediately spring to mind. Adam Lallana is out for the foreseeable future, while Philippe Coutinho has played just 14 minutes in a red shirt this term after coming on as a sub against Sevilla.

It might just be time for the bubble-wrap to be removed from Daniel Sturridge then!

Klopp is continuing with his rotation policy in goal, and so who knows is Simon Mignolet or Lorus Karius will don the gloves come Saturday. In defence, we’d expect Dejan Lovren to keep his place, although the temptation to hand starts to Trent Alexander-Arnold and Andy Robertson must be strong.

In midfield and Jordan Henderson, a regular on the treatment table, must be handled with care. He has played a lot of minutes already this term for the Reds and England so perhaps a start for Alex Oxlade-Chamberlain or James Milner makes sense. 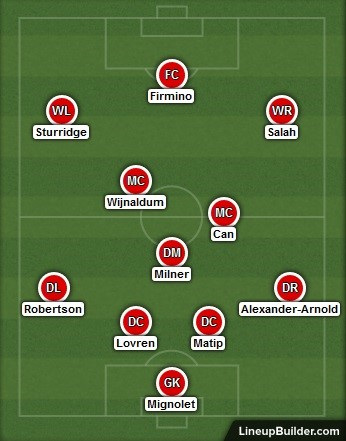 A feature of Burnley last season was that they were outstanding at home but terrible away, and yet so far in 2017/18 they have laid those demons to waste with a 3-2 win at Chelsea and a 1-1 draw at Tottenham.

So the Clarets will arrive on Merseyside with confidence, however that may have been shaken somewhat by the injury suffered by Tom Heaton. The shot-stopper has dislocated his shoulder and may not return until November.

Heaton is a key part of this Burnley side, and without him they are worse off – even though James Tarkowski, the replacement for Michael Keane, has been in outstanding form at the back.

The other concern for the Clarets is that they don’t have an out-ball when defending deep and in numbers. Andre Gray’s pace was their go-to to relieve pressure last term, but he has since departed and replacement Nahki Wells is also out injured.

Burnley won 1-0 last time out against Crystal Palace, but their afternoon will be rather tougher here.

Sean Dyche’s side have shown they can claim points on the road this term even when defending for their lives, and so they must not be written off here.

Liverpool simply aren’t the same team without Mane, Lallana and Coutinho, and it won’t be a surprise to see some rather disjointed play from the Reds as they adjust to the Senegalese international’s absence in particular.

Our first selection is not one that comes highly recommended when Liverpool are playing typically, but Under 2.5 Goals looks of value at 11/8 here. No Mane means less attacking threat for the Reds, and similarities, in defensive style on the road at least, can be seen between Crystal Palace and Burnley – whom the Reds just about saw off 1-0 earlier in the campaign.

If we’re backing the Unders then that certainly brings Burnley into play in various markets, and a strong case can be made for them at 9/8 with a +1.50 Asian Handicap.