It’s an odd thing to say, but Liverpool’s 0-5 defeat at Manchester City was entirely undeserved. There, we said it.

Watch the first 37 minutes of the game back and you see Liverpool, 0-1 down at this point to Sergio Aguero’s strike, well and truly in the hunt. Mo Salah has Nicolas Otamendi on toast, and surely it’s only a matter of time before the Reds find the net.

Then it happens. Sadio Mane is sent off after catching Ederson with a high boot, and all hell breaks loose. Gabriel Jesus bags a second for City just before the break and Jurgen Klopp, with one eye on Wednesday’s Champions League clash with Sevilla, subs off Salah at half time.

It was an admission of defeat: a time to batten down the hatches and try to prevent a hammering. There can’t be many teams on Earth who are better at attacking ten-man opposition than Manchester City, and Kevin de Bruyne in particular made use of the extra time and space at his disposal.

It was a grave defeat, and one that does little to instil confidence in the defence after another shaky showing. Ten men or not, their inability to shackle Aguero and Gabriel is of real concern.

Looking on the bright side, Klopp can at least call upon Mane – whose three-game ban is relevant to Premier League games only – and a rested Salah as part of his usual three-pronged attack, and that firepower might just be enough to see off visitors Sevilla.

The Spaniards are unbeaten in three La Liga outings thus far, and of course beat Liverpool in the Europa League final a couple of years ago. Revenge is a dish best served cold, of course, and the Reds can serve up an icy reception in front of a red hot Anfield following on Wednesday evening.

Other than the long-term injuries to Adam Lallana, Nathaniel Clyne, Danny Ings and Adam Bogdan, Klopp has a full squad of players to choose from for this fixture. How he reacts to Saturday’s defeat in his selection remains to be seen.

Will he make changes as a sort of punishment for the heavy loss? Or will he keep faith with those who started against City, and tell them to go and exorcise their demons at the earliest given opportunity?

A sort of middle ground between the two appears likely. He brought in Ragnar Klavan ahead of Dejan Lovren on Saturday, and it’s fair to say that most were befuddled by the decision. Neither are perfect centre halves by any means, but Klavan’s cumbersome nature is not ideal when tackling an Aguero-Gabriel pairing. Lovren will surely return against Sevilla.

You’d imagine that Klopp still doesn’t know which is his best full back pairing, and while Alberto Moreno’s greater experience may get him the nod over Andy Robertson, on the right it’s a toss of a coin between Trent Alexander-Arnold and Joe Gomez.

Is there a temptation to hand a full debut to Alex Oxlade-Chamberlain in midfield? Possibly, and perhaps the nous and big match temperament of James Milner may come into the picture – probably for Emre Can.

There’s no need to change the front three, who at times terrorised the Manchester City defence at the weekend. Mane will be looking to make amends, and that bodes well for a bright performance. 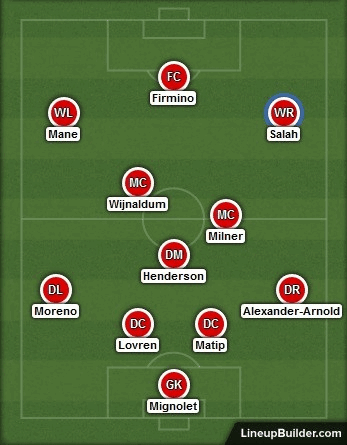 There has been a revolving door transfer policy at Sevilla in recent years, and that continued this summer with more than £86 million worth of talent exiting the club. A stack of new faces have come in and, so far at least, the Spaniards don’t appear to be suffering from any transitional phase.

The big news is that Nolito, who they signed from Manchester City in the summer and who netted in the win over Eibar, has suffered a thigh injury and will not travel with the squad.

Sevilla will be pleased with their efforts so far, but they will be hoping their poor away form of 2016/17 – W7 D5 L7 on the road in La Liga – does not rear its head here.

A feature of Sevilla’s away record last season was an inability to defend – despite finishing fourth in La Liga, their goal difference on their travels was -3.

It’s too early in the campaign to suggest that record will play out in 2017/18 as well, but since we have little to go on we have to assume that the Spaniards will come to play on Wednesday. That will aid their cause and also be to their detriment, too.

Let’s face it: we don’t know who makes up our best back four as yet, and until that is set in stone we will continue to concede goals while uncertainty reigns. But then, on the flipside, if Sevilla try to play on the front foot then the Salah-Mane-Firmino triumvirate could make mincemeat out of their defence.

Knowing how good the Reds are at home, and how average Sevilla are/were on their travels, there is only one bet of note here: Liverpool to Win & Over 2.5 Goals at 27/20.

And for the romantics….Sadio Mane to score anytime is 13/10. You sense he might be up for this one.