Sometimes, there just aren’t enough superlatives with which to describe a performance. Liverpool’s 7-0 win over Spartak Moscow – in a game we had to avoid defeat in to ensure a safe passage to the last 16 of the Champions League – was as captivating as it was simple.

The Reds galloped into a 3-0 lead after just 18 minutes courtesy of goals from Philippe Coutinho (x2) and Roberto Firmino, and the former completed hat-trick just after Sadio Mane had out us four to the good after half-time.

Further strikes from Mane and Mo Salah – as if he wouldn’t come to the party – added the gloss to a very fine attacking performance, and now we head into the knockout phase of the competition full of confidence. With this attack, we can beat anyone.

All of which leads us rather nicely into this weekend’s Merseyside derby against Everton; a side of hopeless proportions this season so far that is likely to improve under the canny management of Sam Allardyce.

His players will have to improve a thousand-fold just to compete at Anfield, however, and it’s been quite some time since we licked our lips in anticipation of a game against the blue half of the city. Without wanting to tempt fate, it could be a very enjoyable Sunday for Reds fans!

Wednesday night would have been absolutely perfect but for the ankle injury suffered by Alberto Moreno. The left back limped off on the even of half time, and the early indication is that he will miss the Merseyside derby on Sunday.

So Jurgen Klopp has a decision to make: does he opt for youth in Andy Robertson, who has certainly impressed in his limited opportunities so far this season, or play it safe with the greater experience of James Milner? For us, picking the latter makes more sense, but Klopp has been known to spring the odd surprise or two in the past.

It was noticeable that Dejan Lovren was subbed off after an hour against Spartak too. He’s okay – there are no injury concerns, and he had a solid enough game – so the only assumption we can make is that Joel Matip’s injury will keep him out for a while longer yet.

You would think, otherwise, the team essentially picks itself, with that dynamic front four ready to carry on where they left off against the Russians. 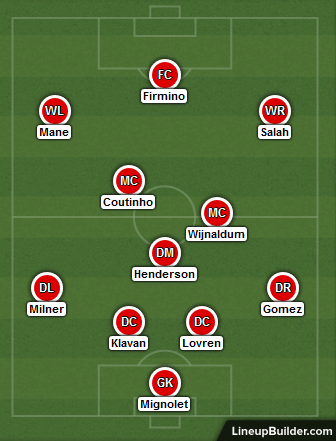 There are two ways to look at Everton this season: pre Big Sam and now.

Prior to Allardyce’s appointment, the Toffees were woeful under Ronald Koeman and David Unsworth, and they were on a one-way ticket to relegation. Abject in defence, they also posed little threat going forward and were seemingly sleepwalking towards the Championship.

But Big Sam has come in and done what all good managers do: steady the ship. In his first two games in charge he has clearly worked on defensive shape as a matter of priority, and clean sheets kept against Huddersfield and West Ham – their first since the opening day of the campaign – are testament to that.

They’ve rattled in six goals as well, although we wouldn’t be getting to excited about that if we were blues. Everton’s attacking play hasn’t really improved as yet under their new manager, and he is clearly going to be hamstrung by the club’s awful recruitment drive in the summer.

Goal-laden? Check. Feisty and hot tempered? Double check. For obvious reasons, any Liverpool vs Everton contest is a lively affair, but for some reason those that take place at Anfield are even more dynamic than those at Goodison Park.

Five of the last six have witnessed three or more goals, and yep, you’re right, it’s been more than a decade since the Toffees last won on our patch – November 1995, to be precise.

Bizarrely, there has been only one red card shown in the last 12 meetings between the two sides. Now, the games haven’t gotten any less ferocious in intent, and that means either the players are getting smarter with how/when they launch into tackles, or the referees in charge are becoming more lenient in order to let these fantastic Merseyside derbies flow.

Either way, we’re happy to back the three cards or less to be shown to Liverpool line at 11/10.

But back to those goals. Everton may have defended better in recent games, but what’s that old saying: you can’t polish a turd? It’s going to be a whole lot of fun watching Jagielka, Williams and co trying to shackle Firmino, Salah and Mane, and realistically if we score early it could be another drubbing for the fans to enjoy.

So we go in again with a betting line that is proving remarkably popular this season: Liverpool to Win & Over 2.5 Goals, which is available at 3/4.