The Reds are heavy favourites, of course, to beat a Spartak side that has shown very little in the competition so far, but complacency really is the worst enemy of success, and so Jurgen Klopp must keep the intensity levels amongst his troops high.

Intensity is one word that could describe his side’s 1-5 win at Brighton on Saturday. With injuries, illness and necessity forcing his hand, Klopp had to field a makeshift back three featuring Emre Can and Gigi Wijnaldum. You can forgive many Reds fans for taking a sharp intake of breath when that team news was announced.

But they need not have worried as goals from Roberto Firmino, Phil Coutinho, Can himself and an own goal from Lewis Dunk handed Liverpool a resounding victory.

We would expect a switch back to the 4-3-3 formation against Spartak, a side who must decide how they want to go about getting the three points they need; will they attack and leave themselves open to our glorious attacking play, or will they try and sneak a 1-0 triumph?

That latter option is not really their style, and so the ball is firmly in Liverpool’s court. Remember, it is likely that we will enjoy a much easier draw in the last 16 of the Champions League if we finish first in the group rather than second, so winning on Wednesday – rather than ‘surviving’ – is essential.

The 3-4-3 formation that Klopp opted for on Saturday took everybody by surprise – he’s rarely tested a three-at-the-back policy, but with Ragnar Klavan believed to have shaken off the virus that kept him out against Brighton there is every chance the manager will switch back to a more familiar system.

Loris Karius has been his nominated choice in goal for Champions League matches, and there seems no reason for that to change here.

Joe Gomez is still struggling with illness so expect Trent Alexander-Arnold to continue at right back with Alberto Moreno returning on the left. In the centre Klavan should be well enough to join Dejan Lovren.

Emre Can could well move forward into midfield alongside Jordan Henderson, with Coutinho given license to roam from an advanced position.

As ever, Klopp has options in attack and can rest players where necessary. But with high takes attached to this game, we expect a return to the holy trinity of Salah-Mane-Firmino. 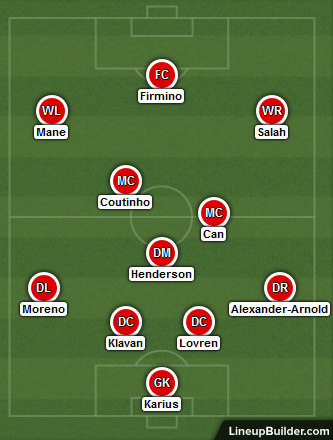 There is, arguably, only limited relevance to Spartak’s form in the Russian Premier League; for what it’s worth, they are unbeaten in twelve with seven wins and five draws.

Instead it’s their record in the Champions League that interests us and specifically their away run, which features a 1-2 defeat at Sevilla and a 1-1 draw with Maribor.

The trip to Seville is the most relevant of those fixtures and that was a keenly fought contest, with the Spaniards just edging matters as far as the scoreline and key stats are concerned. Indeed Spartak’s front four – particularly Quincy Promes and Luiz Adriano – looked dangerous.

So Liverpool simply cannot afford to rest on their laurels against a side who already showed their hand in the 1-1 draw in the reverse fixture.

Both teams to score has landed in all five of Spartak’s Champions League outings in 2017/18, and that gives an insight into both their strengths and weaknesses.

The Russian outfit’s attacking players may not be households names to us, but they can certainly play and with their side needing to attack to get the three points, we’ve no qualms about backing them to find the net at Anfield….

….and that’s because we simply believe that Liverpool will outscore them. Klopp will take no chances with his team selection, and you can expect his first-choice attacking line-up to take to the field.

Ordinarily, we might expect a tense, low-scoring encounter in a match of this magnitude, but we just don’t think it is in the nature of these two teams to sit back and let the game unfold in front of them.

There are a number of different ways for punters to attack this game, and backing Liverpool at 1/4 to win by any measure is simply not one of them.