We suggested that the blockbuster clash with Arsenal would be something of a goal-fest, and to be fair it hardly took investigative powers of Columbo-esque proportion to come to that conclusion. There was no need to call in the detectives to analyse just how we beat Swansea 5-0 on Boxing Day either.

The Welsh outfit came to Anfield to defend – as Everton and West Brom had before them, successfully – but this time the Reds found a winning formula with the guile of Salah-Firmino-Coutinho aided by the forward motion of Gigi Wijnaldum and Alex Oxlade-Chamberlain from midfield.

The result was almost incessant attacking play from Liverpool, and as you would expect once they found their way through the Swansea defence they had things all their own way.

Philippe Coutinho got the party started in the sixth minute, and that ended any worries that it might be one of those frustrating afternoons like the Everton and West Brom encounters.

Further strikes from the in-form Roberto Firmino (x2), Oxlade-Chamberlain and Trent Alexander-Arnold added gloss, but in truth it was nothing less than we deserved for a dominant display. Jurgen Klopp was rather more ‘zen’ here than he was at the end of the Arsenal game!

So it’s been a decent festive period for the Reds thus far, but we must maintain the pressure on Manchester United and Chelsea with another three points against Saturday’s visitors Leicester, who themselves have endured a rather mixed yuletide period.

Klopp made full use of his squad by giving Sadio Mane and Joe Gomez a rest against the Swans, and the luxurious scoreline enabled him to haul off Firmino and Mo Salah after an hour or so.

We would expect a certain level of rotation again, with Jordan Henderson and Alberto Moreno out injured and one eye on the trip to Turf Moor on Monday.

So it’s probable that Mane and Gomez will come back into the side, although deciphering who might make way is tricky! Salah and Firmino are both in the form of their life, but we would anticipate that one of them will make way for the Senegalese ace.

Gomez might come in for Alexander-Arnold, although his extra pace at centre half might be useful in combating the threat of Jamie Vardy.

Andy Robertson has played a lot of football of late, and he might be given the afternoon off with James Milner coming in. 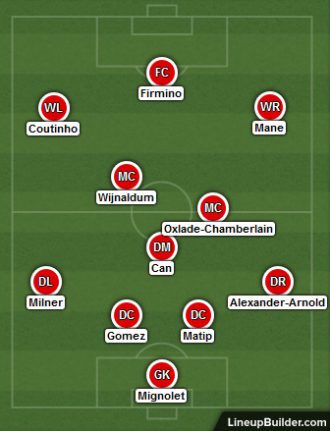 It’s hard to get an accurate read on Leicester at the moment, certainly from their last three results alone.

They were played off the park by Crystal Palace a week prior to Christmas, and can have no complaints about the 0-3 scoreline that was fully deserved from their opponents’ perspective.

They followed that up with a 2-2 draw against Manchester United. That’s a result which looks better on paper than it was in reality, with Harry Maguire’s late, late equaliser nicking a point that simply was not deserved.

But then you have the polar opposite in their 1-2 defeat at Watford; they were the better side on this occasion, but a couple of defensive lapses handed the Hornets the points.

So how are Leicester playing? It’s hard to say, although four games without a win tells its own tale.

It looks, to the layman at least, that if you want to get anything from Liverpool at Anfield then you need to park the bus.

Manchester United did it, Burnley did it, and of course Everton and West Brom did it….all left with a point.

Whether Leicester’s boss Claude Puel has paid any heed to that remains to be seen, but judging from his tenure so far – and his time at Southampton – the defensive approach doesn’t seem to be on his radar.

The Foxes will play on the counter attack, using Vardy’s pace as their ‘out ball’, but that’s not to suggest that is an overly defensive strategy. You’d expect Riyad Mahrez to start, and probably Shinji Okazaki too, so this isn’t an eleven men behind the ball, backs to the wall style job.

And that, of course, plays into Liverpool’s hands, with plenty of space afforded to them in their opponents’ half of the pitch. Assuming Klopp doesn’t go mad with his rotations, this should be another comfortable Reds win.

Their supporters remain unmoved about their back four, with Wes Morgan and Christian Fuchs starting to come in for some criticism. Danny Simpson is struggling with injury, while Harry Maguire – a fantastic footballer, no doubt – still needs to work on that defensive side of his game.

Leicester have a goal or two in them, but while the media falls over themselves to denounce Liverpool’s goalkeeping pair and the defence they handily forget that we have kept seven clean sheets in ten league starts at Anfield this term.

Can we keep another here? Absolutely: Liverpool to Win to Nil is the bet here at 6/4.