Liverpool’s failure in the FA Cup is becoming something of a joke now, and this time we can’t even blame a weakened side for our third consecutive exit at the fourth round stage.

It would be tempting to blame the VAR technology, but in truth that had little to do with our 2-3 defeat to West Brom on Saturday evening. Not that its implementation didn’t border on the farcical, mind you.

We could write about how VAR essentially ruined the experience for those present at Anfield for hours, but let’s instead stick to the basic facts: our defending for the three West Brom goals was way below-par, although in truth the moment Roberto Firmino missed a first half penalty it seemed as if the writing was on the wall.

We can’t really fault Jurgen Klopp’s ambition: he named something approaching our strongest eleven, albeit with Alberto Moreno working his way back from injury and Trent Alexander-Arnold installed as left back.

But with Salah, Firmino and Mane up front, we really should be beating West Brom on home soil.

Still, at least there is the opportunity for instant redemption when we take on Huddersfield on Tuesday evening. Picking up three points will be an essential momentum builder ahead of the clash with Tottenham at Anfield on Sunday.

It’s only natural for the manager to have one eye on the Tottenham game here, which could prove crucial to both teams’ chances of finishing in the top four. But to overlook Huddersfield would be foolhardy.

So hopefully Klopp’s team selection will reflect that. Adam Lallana and Ragnar Klavan are out with slight injuries, while Nathaniel Clyne continues his comeback from that hip complaint. But otherwise, the gaffer has a full deck to work with.

Presumably Loris Karius will come back into goal, as he seems to be the manager’s flavour of the month, while Joe Gomez and Andy Robertson are likely to be recalled.

Jordan Henderson played roughly half an hour against the Baggies but might be saved for the Tottenham game, meaning a midfield three of James Milner, Emre Can and Gigi Wijnaldum is likely.

In attack we expect Alex Oxlade-Chamberlain to play higher up the pitch, with possibly Mo Salah giving way. 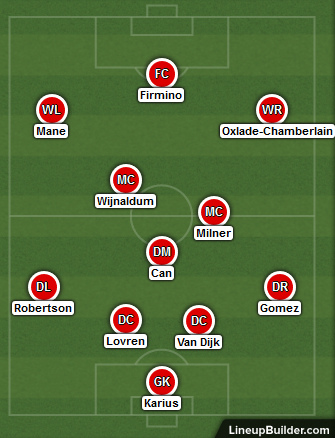 A much-changed Huddersfield were held to a 1-1 draw by Championship side Birmingham City on Saturday; extending their winless run which amounts to six Premier League outings.

That lack of defensive shape will concern David Wagner, whose side boast the fourth worst goals conceded column in the division. On the flipside, they have found the net in seven of their last eight league games at home.

As we’ve identified, Huddersfield are fragile defensively and this will naturally be an area which we look to exploit. Having beaten the Terriers 3-0 at Anfield back in October, there’s no reason why the Reds won’t win this match assuming they stay focused on the task in hand.

The Yorkshiremen are a forceful outfit with some big lads in attack and defence, so they will naturally pose a threat from set pieces. We have occasionally, been found wanting when defending set plays and crosses this term, and so Huddersfield may just fancy their chances of ruffling a few feathers and perhaps finding the net themselves.

Sandwiched between the West Brom and Tottenham matches with minimal recovery time, we’re at a liberty here in trying to predict Jurgen Klopp’s team selection, but as long as he fields at least two of our holy trinity up-front there is absolutely no reason why we cannot pick up the three points here.

Of course, a pair of defeats in a row now at the hands of Swansea and the Baggies is a concern, but the best response to falling off the horse is to get back in the saddle, as they say. There’s no time to dwell or ruminate: it’s straight back to the grind for all concerned.

Liverpool are priced as short as 1/4 in some quarters to win this one, and while that is far too short to take seriously we can extend our value by adding the Liverpool to Win & Both Teams to Score play at a more generous 23/10. That’s a fate which has occurred in three of our last four league outings.