No alarms, no surprises: why can’t we play like that every week!? The 3-0 win over Huddersfield on Tuesday was almost effortless in its simplicity: despite the odd glimmer from the Terriers we were rarely troubled at the back, and Emre Can’s early deflected goal offered a level of comfortability.

Further strikes from Roberto Firmino and Mo Salah – taking over penalty duties from Bobby – rounded out the win, and it was a happily trouble-free night in Yorkshire all round.

The good news is that Sunday’s visitors to Anfield, Tottenham, were embroiled in a rather more intense affair against Manchester United on Wednesday. They ran out 2-0 winners, with United never quite recovering from going a goal down in just eleven seconds.

Incidentally, that result leaves us just three points behind Manchester United in second, so Sunday would be as good a time as any for Jurgen Klopp’s hoodoo over the ‘big six’ teams to continue!

It was a pretty quiet last few days of the transfer window, fortunately, and so there were no obvious comings or goings that will affect us during the next few months.

No doubt Daniel Sturridge will go to West Brom, get a run of games and score some goals, but he was unlikely to ever feature in a meaningful way given those ahead of him in the pecking order for an attacking berth.

On the injury front, Ragnar Klavan and Adam Lallana are both struggling with little knocks, and there is only a small chance that they will be available for selection here. In truth, they may not have featured in Klopp’s plans anyway.

As ever, the front three picks itself, and in midfield is where the manager’s nous will come into play. Tottenham’s main strength is, naturally, the goals of Harry Kane, but that’s not to underplay the contribution of the trio behind him in Dele Alli, Christian Eriksen and Son Heung-Min.

Interestingly, you sense that Spurs will be more fearful of us than we are of them, but even so expect Klopp to pick two defence-minded midfielders to act as a shield in front of the back four. Emre Can and Jordan Henderson seem the most likely options.

The 0-4 defeat to Tottenham at Wembley in October is now, thankfully, a distant memory, but those with a strong disposition may just remember the schooling that Kane handed out to Dejan Lovren that day. Don’t expect the Croat to feature here! 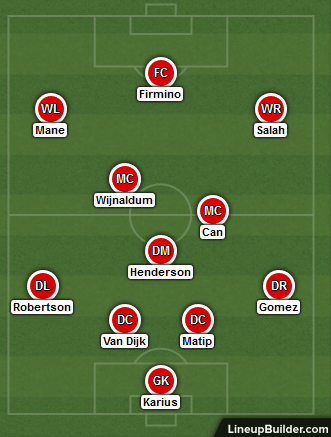 Tottenham’s 2-0 win over Manchester United on Wednesday was an indicator that, yep, they are the real deal.

You look at their side and there are no weaknesses from front to back, and nobody would be surprised if they cemented their spot in the top four come the end of the season.

They’re unbeaten in seven now, with five wins and two draws, and in that time they’ve netted 18 goals and conceded just four.

So where does Tottenham’s weakness lie? That’s quite a simple question to answer: they’ve lost five league games this term, and four of them have been away from home. Three of those have been against ‘big six’ teams – Manchesters United and City, plus Arsenal….can we make it four?

Both ourselves and Tottenham are betting going forward than we are defensively, that much is obvious. Our defensive woes are well documented, but when you think that Spurs have conceded as many goals as Burnley this term you get a flavour of the underlying story. Also, they will be without the injured duo of Toby Alderweireld and Serge Aurier.

The real weakness in Tottenham’s side is Davinson Sanchez, the centre back who is strong and quick but who appears prone to errors. Expect Mane and Firmino to give him an evening to forget thanks to our high press – much like Kane did to Lovren a few months ago.

The stats regarding Klopp’s record against the big six are well documented and don’t need repeating, but worth reiteration is how we have dominated games against Arsenal and Manchester City this term; the latter, remember, was an absolute shellacking before City’s two consolation goals in the last seven minutes. And those guys are the champions-elect, remember.

There aren’t many occasions where we won’t tuck into odds-against prices on Liverpool at home, and this isn’t one of them. Take the 11/10 on a Reds victory.

If you want to cover that bet to some extent, try the Over 2.5 Goals & Both Teams to Score market at 17/20. Both teams will try and play on the front foot, and a litany of attacking talent should enjoy itself against two less-than-solid defences.