How to sum up the 2-2 barnstormer with Tottenham in a succinct and concise fashion? Hmm…. We can say that Liverpool were the better side for the opening 70 minutes and deserved to lead through Mo Salah’s goal. Then Spurs boss made a couple of substitutions that would ultimately change the game.

Victor Wanyama scored an absolute screamer to level up proceedings before Erik Lamela went down like he’d been shot after a gentle tap from Virgil van Dijk. Harry Kane, having earlier missed a penalty after he himself had dived….sorry, ‘made the most’ of contact from Loris Karius, put the resulting spot kick away.

In-between, Salah had wriggled through the Tottenham defence to score another high quality goal, and after all the excitement and controversy it was actually Jurgen Klopp, visibly distraught, who summed the game up best in his post-match interview. “There were so many situations to talk about, but the ref’s decisions decided the game so I can’t help but talk about them, he said.

“I don’t understand either of the penalty situations. The first one was offside and the second, I know already what the ref and his assistant will say. There was a touch, a little touch. But Lamela has jumped into him and wanted the touch and to go down.”

“We were a bit unlucky here and there but we had enough chances to win the game. And we would have if it wasn’t for those decisions.”

So in some respects it felt like two points lost, although the ‘glass half full’ merchants will remind us that we played a quality Spurs outfit off the park for the most part, conceding a wonder goal and a soft penalty that would deny us all three points.

We’ll take the positives then, and head into Sunday’s clash with Southampton full of vigour.

Two defensive changes caught the eye from the Tottenham game: Joe Gomez being replaced at right back by Trent Alexander-Arnold, and Dejan Lovren keeping his place to mark alma mater Harry Kane in lieu of Joel Matip.

Gomez actually has a knee injury, and with one eye on the Porto game in the Champions League next Wednesday he probably won’t be risked against Southampton.

Lovren’s inclusion must have been tactical, and to be fair the big Croat had a decent game – barring the sliced clearance that allowed Kane in on goal, which was the passage of play where he ‘fell’ over the challenge of Karius to earn the penalty he would ultimately miss.

The Porto match is an interesting one, as Klopp will be desperate to sneak an away goal or two on the counter attack. He may decide to rest one of our attacking options then, which would likely mean a start for Alex Oxlade-Chamberlain here. Adam Lallana, sent off for the Under-23s the other night, seems to have been blackballed for the time being.

Southampton are a side that needs to be attacked; they don’t offer a massive amount going forward. So maybe the dynamism of Gigi Wijnaldum in midfield would be favourable over the more stoic James Milner or Jordan Henderson. 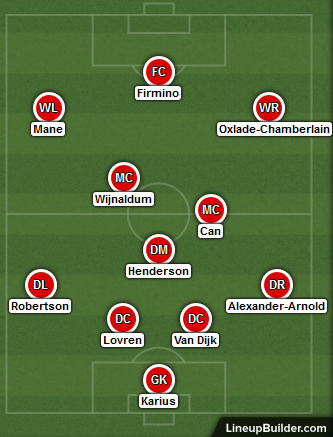 Prior to their win at West Brom on Saturday, Southampton were in the Premier League’s relegation zone: a dramatic fall from grace for a side who finished eighth last term and also reached the EFL Cup final.

The victory at the Hawthorns was their first since November – a span of 12 games – and the sense of relief in the Saints camp was evident for all to see. If they had lost, you suspect Mauricio Pellegrino might have been out of a job.

The Saints’ obvious problem is defensive: our capture of Van Dijk exacerbating that problem (sorry lads). They have conceded at least once in 21/26 games this term, with just one clean sheet since October (17 matches ago).

They’ve claimed just 15 points from the available 42 at St Mary’s this term, winning just three of fourteen. Only Watford and Stoke have conceded more times on home soil.

The over-arching narrative here is that Southampton a) struggle at home, and b) are fragile defensively. Both of those things play neatly into our hands.

As you may already know, Liverpool’s away record (W7 D3 L3) is almost as good as our form at Anfield (W7 D6 L0), and the obvious reason for that is because we can play on the counter attack away from home. Also, there is typically an onus on the hosts to force the issue; giving our electric three plenty of space to break into.

It’s a compelling theory and one that has proven true on countless occasions this term, so back the Liverpool win wholeheartedly. You’ll get odds of 41/50 with some of the more obscure bookmakers, and 4/5 with the mainstream books.

The Saints have kept two clean sheets in fourteen home league encounters this term, and one of those was on the opening day of the campaign. That shows a certain proclivity for conceding goals, and punters can back 8/11 on Liverpool scoring two or more. That is unmissable.