If there’s one thing that nobody needs reminding of, it’s the fact that a week is a long old time in football. Barely a week after celebrating a 2-1 win over Everton in the FA Cup, courtesy of a debut goal from new man Virgil van Dijk no less, came the news that Philippe Coutinho would be leaving the club to join Barcelona.

It was devastating news, of course, but deep down most Reds fans knew that this was coming at some point. The problem was that most of us expected the Brazilian to depart in the summer, not in January.

Tabloid reports suggest that we tried to implement a loan back option that would have seen Coutinho stay at the club until the end of the season, but that was rejected immediately by the Catalan giants. And so we have a dilemma: how do we replace him?

News is spreading today that Naby Keita will be able to join us ahead of schedule, with his present employer RB Leipzig willing to take an additional payment so the African star can head to Merseyside ahead of his planned summer move. If that turns out to be the case, it would be a huge fillip for Jurgen Klopp.

Other names such as Riyad Mahrez and Thomas Lemar have been bandied about by the press, but right now we need to focus on a direct replacement for Coutinho: an orchestrator who can link the midfield with our fabulous three up front. Neither of those two names are suited to the role, and so bringing in Keita this January is essential if we are to keep up the momentum.

Such discussions have rather side-tracked us at a time when we should be preparing for one of the biggest games of the season: a date with high-flying Manchester City at Anfield on Sunday.

It would be foolish to suggest that victory over the Citizens would throw the title race wide open, but we are very much embroiled in a battle for second place this term and three points on Sunday would be a tremendous aid in our attempts to overthrow the red half of Manchester.

Given Klopp’s fine record against the division’s ‘big six’, perhaps not is not out of the question – Coutinho or no Coutinho.

Against an outfit with the attacking intent of Manchester City, you would expect most managers to batten down the hatches and try to limit the amount of time and space that their fine attacking talents have at their disposal.

But we know that Jurgen Klopp isn’t like other managers….

So we can rest assured that he won’t deviate from the formula that has served us so well all season. That means four at the back, two midfield pivots, a more advanced link man in midfield plus the front free of Sadio Mane, Mo Salah and Roberto Firmino.

The good news is that the Egyptian is back in full training after missing the Everton game, and it appears as though he is fully fit and raring to go again.

The back four picks itself. Van Dijk and Joel Matip will form the bedrock of what will hopefully be a reliable central defensive partnership, with Joe Gomez right and Andy Robertson – who continues to deputise for the injured Alberto Moreno – on the left.

Jordan Henderson is expected to miss out as he continues his battle with a thigh injury, and that will presumably prompt Klopp to start with the steady and serene James Milner in the middle of the park, alongside the equally pragmatic Emre Can.

Just ahead of them, Adam Lallana – who looks back to full fitness – must prove that he can be the perfect replacement for Coutinho. 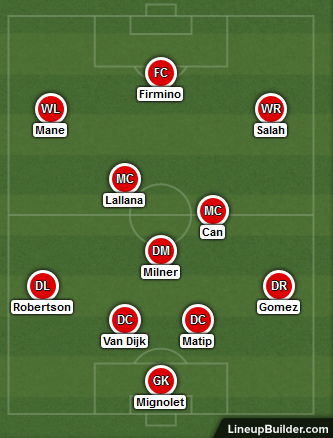 You probably don’t need us to tell you about Manchester City’s form! Pep Guardiola’s men remain unbeaten in the Premier League (W20 D2 L0), and have made casual progress into the knockout phase of the Champions League, the fourth round of the FA Cup and the semi-finals of the Carabao Cup.

The Citizens have been near faultless all campaign, but there are two slight anomalies that stand out, and both came away from home: defeat to Shakhtar Donetsk in an admittedly dead rubber Champions League clash, and the 0-0 draw with Crystal Palace a fortnight ago – the Eagles arguably should have won that one.

Those are tiny crumbs of optimism for Reds fans, but that’s all we’ve got!

W9 D12 L3 – that’s Jurgen Klopp’s record against the Premier League’s so called ‘big six’ since taking over at Anfield.

On a game by game basis those sorts of stats are rendered meaningless, but over a larger amount of fixtures – and those matches above cater for more than 2,250 minutes of football – clearly there is something in that.

So what are we insinuating? Certainly that Liverpool have a better chance of getting a result here than most are expecting.

Ignore the 0-5 defeat against City earlier in the campaign; after being reduced to ten men courtesy of Sadio Mane’s contentious red card, the wheels fell off and Guardiola took full advantage. For the first half an hour or so, however, we were well in that match.

Here’s a head to head battle we like: Mo Salah running at Fabian Delph, who is a midfielder playing at left back to deputise for the absent Benjamin Mendy. It is a contest that the Egyptian should win with consummate ease; that will leave him free to run at the heart of Manchester City’s defence….who knows what chaos he will create.

Of course, City aren’t shy themselves going forward, and so we do expect goals to flow.

However, and here’s the thing: Manchester City have played eleven Premier League matches away from home this term, and won only three of those by a margin of two goals or more. So, in backing Liverpool with a +0.50 Asian handicap, we are actually swimming with the statistical tide!